You will be called a racist if you say racist things 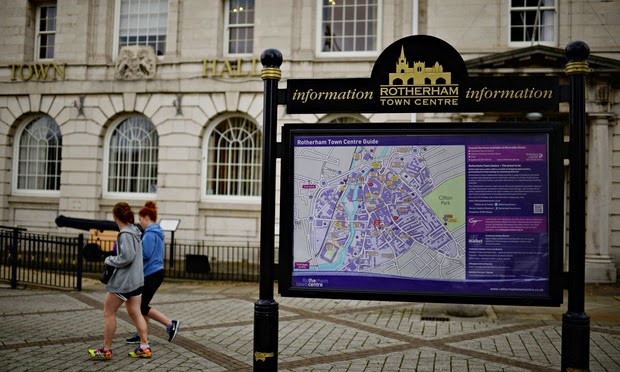 "While on their own facts cannot be racist, the way they are chosen certainly can be" says Joseph Harker in The Guardian. I rarely have anything good to say about the Guardian but this article leaves just about everything else standing. When you compare it to the torrent of witless prattle on the subject, this really is a breath of fresh air.

The article also draws attention to an article I must have missed back in August by Hugh Muir asserting unequivocally "Blaming the Rotherham abuse on a fear of being branded a racist is ludicrous". I could not agree more. Together these two pieces succinctly tie up all of the estimations of this blog and I feel a huge weight lifted knowing I'm not the last sane person on earth.

The fact is that officialdom does has to be careful what it says and how is because of how the media, namely The Daily Mail, wilfully distorts the news agenda providing all the selection bias a self-indoctrinating zealot could ever need to fuel the rage on which they thrive. The details matter, the background matters, the specifics matter - and without them public perceptions are distorted - to the point where it has become a generally conceded point that political correctness was the cause in Rotherham. How relieved the guilty must be. They got away with it.

But this is also not a race issue either. As we discussed just the other day, the same distorted perceptions of MP's exist because of pernicious reporting of the facts and similarly warped percpetions exist about people on benefits on the basis of some carefully selected examples spoonfed to readers on daily basis.

The narrative that people are afraid to say things because they fear they might sound racist is not really true because all the lazy and ugly things have been said on the internet, and where people have called them racist it's because they are racist - or at the very least so indoctrinated they are impervious to new information. Half the reason that dynamic exists is because if you have to admit one perception is wrong then chances are all your perceptions are wrong and then your entire worldview rapidly unravels. I know this because I speak from experience. Anger and hate are very difficult things to let go of. I'm actually a little cross with myself that I spent so many years dancing to their tune.

And it is because that dynamic exists that we get surges from what we call the far right. And now Ukip has all but joined in, exploiting the anger and ignorance of ordinary people to advance Farage's own agenda. What we have seen from Ukip is a lazy and and crass construction of a narrative which is a dog-whistle to Ukippers, and the rage expressed against Hugh Muir in the comments tells you all you need to know. Similarly, a quick browse of the Ukip Reddit page or Kipper Twitter feeds will show up similar. We've seen Ukip spouting 2008 BNP mantras and Kippers on Twitter posting memes about the Prophet Muhammad being a paedophile, along with language that alienates not only Muslims but also anyone with a basic sense of decency.

So yes, we do need to do more to educate the public and about matters of race and culture, we do need to expand the debate and authorities must be cautious in how they acknowledge race sensitive issues because people can and do get the wrong impressions - and the results are toxic. That the race relations industry is inept at doing that is another matter and that's the main reason we should question its existence, but its continued existence does not explain the multifarious failings of systems that should protect people but don't.

But more important than that, we need to educate the public in how the reactionary elements of the media, propped up by pseudo-intellectual contrarians, are stoking up prejudices for their own entertainment, their careers and for their own political agendas. We have already discussed how Ukip is actually the media's own bastard creation and there are games within games we are not even party to. Were I to pick the greater of two evils - government, or our media as it now stands, I would pick the media. The words of Joseph Harker, Hugh Muir and to an extent Tim Stanley are the exception rather than the norm.

The danger is when vessels such as the BBC are mealy mouthed, but rather than it being political correctness is it the impossibility of walking the line of satisfying everyone it is not biased. It often leads to it saying too little and right wingers will always accuse it of "hiding the truth" if it attempts to contextualise.

The actual truth is that Kippers and their fellow travellers not interested in the truth. They've had their hatebait from the Daily Mail and it's so popular there is a market for more of it. Hence why we now have the Muslim obsessed Breitbart London. I'm afraid they are going to have to come to terms with the fact that if they say racist things then people will call them racist. And if they are afraid to be called racist when they are being racist, then they could do us all a favour and shut up.
Posted by Pete North at 19:47