The only power terrorism has is the power we give it 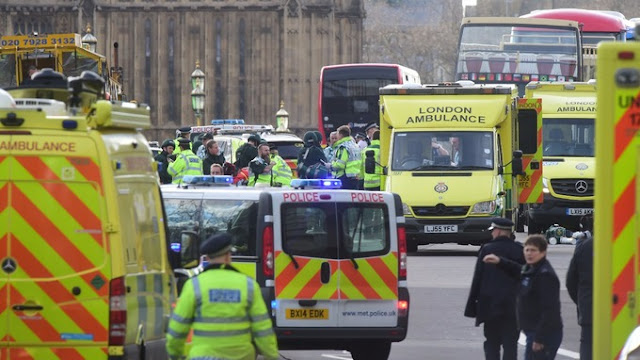 I think one thing that marks this terrorist attack out from all the others in recent times is the comparatively muted response to it. All the opinion pieces have been written many times before, nothing about it surprises us and I will be surprised if it occupies the media window for more than another twenty four hours.

That's not surprising though. As terrorist attacks go this was fairly pedestrian. In order for it to be news it needs to have a lorry, a bomb or a machine gun involved. News wise, this doesn't rate. Ratings wise, Islamic terrorism has jumped the shark.

That is to be expected. 7/7 was pretty epic and there's no topping 9/11. There's nowhere you can really go after that. If that didn't topple the west or start world war three they are wasting their time.

As it happens I'm willing to bet more people died from sexual misadventure than terrorism yesterday. A couple of bodged strangle-wanks and an accidental sex swing beheading just in Soho alone probably tilts the scales.

This is where the IRA knew how to do terrorism. If you attack London, it's all in the game. A liberal society, home to one of the planet's first cities is going to attract a random atrocity or two every now and then. It's only really a policy problem if it's rather frequent.

The IRA learned from the Luftwaffe's Baedeker raids, in that if you want to scare the bejesus out of people you have to go outside London to show people that they can be hit anywhere. Warrington made every crank call something worthy of an emergency response.

The fact of the matter is that Islamists are really shit terrorists. They don't rate. Nothing they want is anything we can give them. The IRA wanted Britain out of Ireland. We could oblige them if we wanted. That's what makes the game worth playing. Islamists on the other hand want us to go back to the dark ages and live like cavemen. It's all stick and no carrot.

Y'see the West is better at this "oppressive patriarchy" shit. Because women want "equality" we have gradually handed over the board rooms and the top government positions to women. Most of the top jobs in HR now go to women and pretty soon the same will apply in science and engineering. Women being more capable and motivated, it'll be us blokes sitting at home watching Jeremy Kyle and doing the ironing while the womenfolk are off proving they are equal. More than happy to let them.

The West has functioned on the bogus notion that there is dignity in work and that if we all work hard we can all succeed and be whatever we want to be. This lie is the only reason the West still has a functioning economy at all. If women want to take it over so they have to punch numbers into spreadsheets all day then that's fine with me. Nothing ISIS has competes with that.

As to terrorism, it's just political campaigning using violence. You have a manifesto and rather than using persuasion you use terror. It only works if you are good at it. And Muslims are not. They need the Hollywood pizazz of 9/11 every other week or it's just not going to fly.

Meanwhile, we don't need terrorism for ourselves. It's not because we have a democracy. It's just that you only need a minority party to commit to something for a few years and then it happens because nobody else really gives a fuck. See Ukip/Brexit. We are mainly governed by people who give a fuck. A very small and self selecting minority. I might even venture that this is a good thing.

In that respect, if I ever go postal and kerb stomp John Redwood or Steve Baker, please don't call it terrorism. It's not violence for political ends. These are just motherfuckers who have it coming because they are shitheads on my radar.

As to actual terrorism, I think the current approach of making a few obligatory rhetorical noises then getting on with our shit is probably the right approach. The more counter terrorism measures we pile on London the more we become the sort of paranoid miserable shit hole that refugees risk life and limb to escape. We should resist that. If that means the occasional dead copper then that's ok too. It's a good pension and you know the risks when you sign up.

This may sound cynical and a touch uncaring, but then that's the whole point. Cynicism is the absolutely correct response. I didn't give a toss about the Paris attacks and I sure as fuck don't care about London. It is that complete lack of concern that defeats terrorism. We responded militarily to 9/11 and look where that got us. Total waste of time. The era of Islamic terrorism on Western soil would have been far shorter lived had we simply treated it as compelling TV then carried on not giving a fuck. The only power terrorism has is the power we give it.
Posted by Pete North at 16:38 No comments: