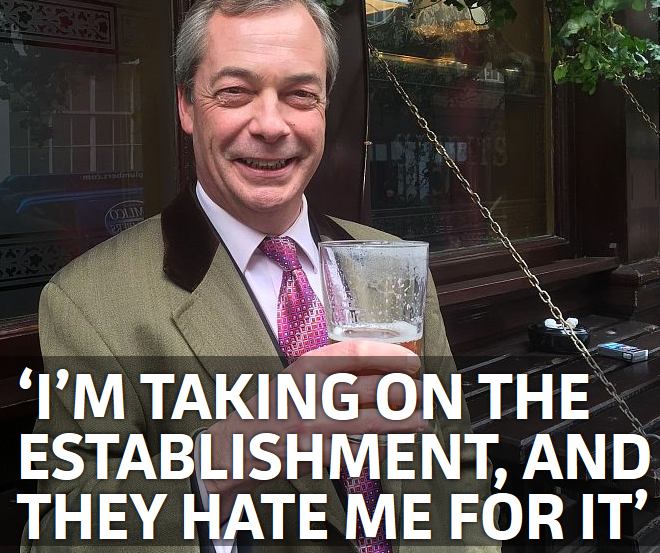 Oh dear. Spiked Online has bought the Farage Mirage. Let's get one thing straight. Farage doesn't believe in anything. Farage believes in Farage and that's about it. He will say anything to anyone. He is a skilled manipulator and goes for the lowest common denominator every single time because Farage is not interested in growing a credible movement, only maintaining his own space in the political landscape.

Far from "taking on the establishment" he has hijacked what was once a tactical device of the eurosceptic movement in order to further his own ambitions - and believes Ukip will put him in parliament where he has always wanted to be. Only when you really understand that, and the psychology of Farage will you truly understand Ukip. That so many don't know really what he is, is why so many hacks get this so badly wrong.

The clue is in the first paragraph: "‘I judge everybody by two simple criteria. Number one: would I employ them? And number two: would I want to have a drink with them?". There is the third of fourth test though: "Does this person threaten me" and "will they keep buying my bullshit?".

Now look at who he surrounds himself with. Idiots, sycophants and ambitious underlings who think there's a sinecure in it if they play their cards right. Thus it is not a party - it's Farage's gang, with a brand name that has been catapulted into the limelight by a media so bored by mainstream politics it has thrown Ukip into the mix largely for its own entertainment. They built 'em up and they'll knock 'em down. Course Farage doesn't really care just so long as the wave is timed well enough to give him his spot on the green benches.

O'Neill talks about ideas free politics, but remember this is a party that repeatedly fails to reveal any policy our outline any details. None of their "policies" are tied to a particular agenda or ethos, nor do they even interrelate according to a philosophy. It's a serious of soundbytes that seem just plausible enough for the average Kipper to believe there is something of substance behind them. There isn't.

Farage knows you can fool some of the people some of the time and thus has adjusted his rhetoric to cannibalise the BNP vote. It taps into a big enough constituency that he can fool the media into believing it's a movement, but really Farage is just parasiting off existing resentment and slapping a brand name on it. His only real skill is weaving a narrative that he has grown a movement poised to threaten the establishment. It is aided and abetted by columnists who don't understand what Ukip is because they don't understand what Farage is.

Meanwhile, those who DO know what's going on have been watching Ukip bump its head on the glass ceiling for quite some time because the politics and demographics of Ukip make it impossible to grow into a credible movement. And rather than being an asset to some of the politics O'Neill subscribes to, it is gradually undermining them by association, not least euroscepticism - its raison d'etre. It has no intellectual capital and functions entirely on the whims of Farage.

Essentially O'Neill has joined the herd in writing a puff piece for Farage and his shoddy little gang, not realising he's just been played as much as Kippers have. He's completely misunderstood what Ukip is and is in no position to pontificate about the "mainstream media and chattering-class" - because he is a fully signed up member of it, spouting roughly the same bollocks as Breitbart, Ford, Goodwin and all the other cleverdicks who haven't the first idea who they are dealing with or what they are talking about.

O'Neill concludes "Should you vote UKIP? That’s entirely up to you. It couldn’t be any worse than a vote for the warmongering, liberties-destroying, recession-starting Labour Party, or the Libya-killing, economy-choking Tory Party, or the illiberal and undemocratic Liberal Democrats".

Which really demonstrates O'Neill is about as shallow as Farage. It could be worse. By a long shot. Putting those nihilistic wreckers in charge of anything would be a disaster.
Posted by Pete North at 15:49