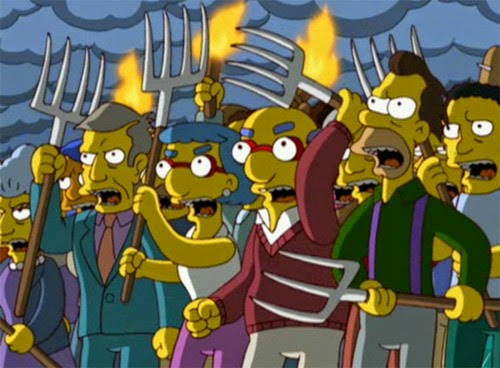 A couple of years ago I might have agreed with every word of this Ken Malik piece. There is a mood in some quarters that the Twitter mob is degrading the public sphere by policing language. I'm a good deal more relaxed about it these days. I don't think there is any cause for concern.

It's not that the Twitter using public are politically correct ghouls seeking to regulate public debate. The outrage is entirely manufactured and most of the time it doesn't stick, nobody cares and nobody remembers. Except for the few times when it does stick. In this case, Clarkson whose whole appeal is the fact he is a buffoon, and Top Gear which is basically voyeurism to see what would happen if you did give a twelve year old boy all the best toys without ever saying no. But in this instance, punching a producer in the most petty of circumstances is a deal breaker. There is a line for brattish petulance, and Clarkson has crossed it.

But if we look at other Twitter career kills, we see the likes of Bongo-Bloom kicked out, not because he said a racist thing, but because he is a racist, a sexist, a drunken boorish oaf and a dinosaur. Similarly Jack Monroe was not forced out of her Sainsbury's contract because of what she actually said. People say far worse things all the time. I certainly do. To her especially. But the outrage mechanism has a certain "wisdom of the crowd" about it in that what we actually see is people ejected out of the public sphere who were never welcome in it in the first place. None of these people have any constituency of their own. They are projected into the public domain by a corporate media, or in Bloom's case an accident of numbers in a PR system designed to weaken the grip of national establishment politics.

Moreover, it's now fairly well established that there are unwritten ground rules to playing the Twitter game. If you live by the sword then you will die by the sword - and it was not what Jack Monroe actually said that brought her down but her petulance and rank hypocrisy. Meanwhile, the notion that public debate is being stifled is a silly one. Katie Hopkins, George Galloway and the likes all play their pantomime ogre parts, and it's all tolerated. They will fall eventually but that's when the public tolerance for these bozos has finally dried up. Meanwhile, any adult approaching a subject with the necessary maturity can force a debate into the public domain. They will naturally make enemies on the way, and there will be much outrage, but in most instances they just have to suck it up. That's just politics.

The faux outrage is just the trial by fire any controversial figure must endure, and the outrage is a sure fire way for them to get a full hearing. If they can the broach their issue with the necessary skill and intellect, the public will rally behind such an individual, as indeed they have with Clarkson. In this case the public happens to be wrong, in my most humble opinion, but the Twitter mob does serve a function in ridding the public sphere of blabbermouth gobshites who create controversy for its own sake - and do so for entirely self-serving reasons.

It is for this reason Farage and Ukip will soon be a distant memory, which is no bad thing - and eventually any counter establishment movement will work out there is a mountain to climb and more sophisticated means on climbing it. It would be a matter for concern if Ukip were taking the flack while winning the arguments, but the mob have taken a good look at Ukip and rightly concluded that for all the bluster, some of which we may agree with, it doesn't offer us any real answers.

In the final analysis, the question to ask is; who has been ejected from the public domain by the Twitter mob who didn't actually have it coming?
Posted by Pete North at 10:11