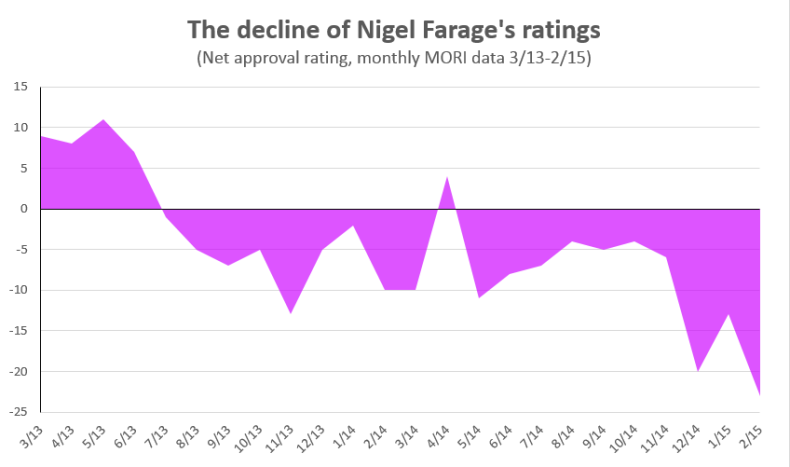 The fallout from Farage's idiotic remarks looks to be far more damaging than I immediately anticipated. Ukip is getting a pasting on Twitter. It also looks like Politics Home is starting to connect the dots.


The difficulty for Farage is that while many voters approve of Ukip's immigration policies, there are many more for whom Ukip's reputation as a racist and nasty party remains a major turn-off. Ukip's success has been built on the basis that they are not a typical far-right nationalist party. Their success at rejecting accusations of being the 'BNP in blazers' has been central to their rise from being a minor party to their current position of threatening a breakthrough in the House of Commons. By fuelling these old negative perceptions, Farage risks undoing much of the work he has done in transforming his party's standing.

By confirming voters' fears about the party, Farage increases the possibility of people voting tactically against them. Recent marginal polling by Lord Ashcroft suggest that this could already be happening. The polls of Conservative-held Ukip targets found the party failing to make breakthroughs even in seats where they won their best results in last year's European elections. Nigel Farage has successfully placed his party into the mainstream of British politics. His latest comments risk putting them right back into the margins again.

Readers will know my view on this. It was predictable and predicted. Ukip only enjoys its surge status because it cashed in its chips chasing the BNP vote for a few more MEPs. That was a remarkably stupid move because now Farage is reaping what he sowed. And this was praised as Farage's strategic genius.

While Ford and Goodwin were talking about a "rise of the right" by reading the poll averages, this blog was looking at the big picture and Farage's approval rating as illustrated above. Being that Ukip is Farage, there was no other way it could go but down. And with The Sun coming out against Miliband, that two horse race is about to start. Politics Home speculates Farage's latest comments risk putting Ukip right back into the margins again. Looks to me like that ship has sailed already. Right on schedule too.
Posted by Pete North at 03:42