How about we ban crappy journalism? 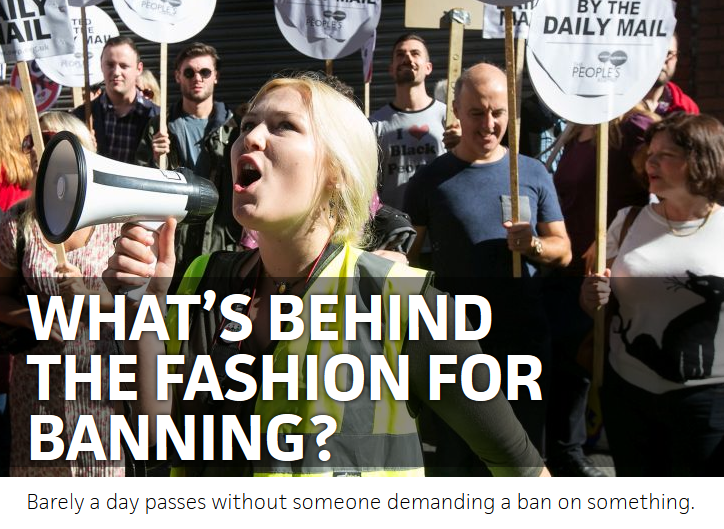 Frank Furedi is blowing his own dog-whistle this week remarking that "barely a day passes without someone demanding a ban on something". Ironic that a man who complains about the shallowness of British politics would produce this superficial, lazy narrative by means of selection bias, peppered with florid language like "tinpot dictators, ecclesiastical zealots, illiberal judges" to sell it. Easy stuff to write. A lot harder to engage in the subjects he cites on more than a superficial level.

Plenty of people moan for things to be banned. They are entitled to do so in our sort-of-democracy. They've tried to ban all kinds of things for years and not succeeded. But the examples he cites have some justification.
New products on the illegal highs market are potentially lethal. As an occasional user of illegal highs I'd rather take my chances with MDMA and coke than whatever the hell those shops are selling - not least because they seldom ever work and there's no public health surveillance on the effects. They have killed people. I don't want this stuff marketed to kids, I don't want it available to kids and if people want it they should get it from the internet.
Similarly you could make a very strong case that the fashion industry has much to answer for and its prominence means it does have a social responsibility not to promote unrealistic body types - photo-shopped waistlines and models who starve themselves. Ironically, an ideal promoted by fashion designers, half of whom are gay. The ideal female body type is not static in history and the fashion industry has a major influence in creating those ideals.
The attack on fast food is perhaps a little misguided but in an NHS with stretched resources and an ageing population, it has to look at prevention as much as cures and that includes regulating foods. Not least because we live increasingly sedentary lives and coronary conditions are on the rise again. Fast foods are the product of sophisticated marketing psychology and taste testing, using additives of all kinds creating burger meals with more calories than the average person needs in a day. Brits above all have an unhealthy relationship with alcohol too. Public health is part of the state's remit - and so is regulation of it. It's not too much to ask that supermarkets don't put advertising aimed at kids by the checkouts too. Will free society really cave in otherwise? So much around us is regulated - we don't notice and we don't care and we are no less free for it.
As to smoking, we're operating a policy of gradual phase out because like it says on the packaging, smoking seriously harms you and others around you. Sure, it might not kill you but there's certainly nothing edifying about spending your last twenty years on the planet unable to walk more than a few yards from your oxygen tank. And choking to death is a shitty way to die and a horrible thing to subject your relatives to. As to powdered alcohol. What could go wrong?
As to the DNA debate, there has never not been a fierce debate about messing with the genomes, and that's a good thing. Ironic that free speech crusaders Spiked are bitching about a very robust debate about something with not inconsiderable ethical considerations.
As to the banning of fraternities, that's an entirely imported cultural narrative from the US and it's a debate barely relevant to Britain. It's only going on because of US cultural hegemony encroaching on UK debate because our own politics is so shallow, not least because of Spiked's fatuous cherrypicking of minor bans from across the Northern hemisphere, painting a picture that we're fading into a nanny state oblivion - which is silly. His final example of the lady who wants to ban dogs on beaches in Clacton, well so what? Stupid thick person from a Ukip voting place says something stupid and is quoted in the local rag. Well shit the bed!
Then we get to the finally paragraph which is more florid and recycled verbiage, building a crescendo for the moneyshot so you come away feeling satiated with moral probity.

Back in the fifteenth century, the word ban was applied to a formal ecclesiastical denunciation. It communicated the idea of anathema, interdiction and excommunication. In today’s world, the word ban likewise contains the sentiment of excommunication. But in contrast to the past, when the targets of ecclesiastical denunciation were relatively clearly defined, today the targets are far more arbitrary. That’s because, unlike the morally purposeful excommunicators of the past, today’s awareness-raisers have very little in the way of a clear morality or firm idea to communicate. In the land of moral illiteracy, all that’s left is the ban.

This is also known as pompous toss. Meanwhile, rather than dismissing regulation on a knee-jerk basis some people are actually digging into it, looking at the justifications and where it actually comes from, and finding some of it is entirely rational, reasonable and in fact it isn't faceless bureaucrats dreaming up "crazy" regulations for shits and giggles. Nor is it nannying fussbuckets. It's accountants and policy developers worrying that the public wants to gorge itself and drink itself half to death then expect a gastric band operation so the knee surgeon can do his work - and they have no desire to pay for it. But then narrative building is far easier than engaging in complex policy making. This kindergarden stuff has its own constituency so why bother doing any actual work?
Posted by Pete North at 16:05