A point on immigration 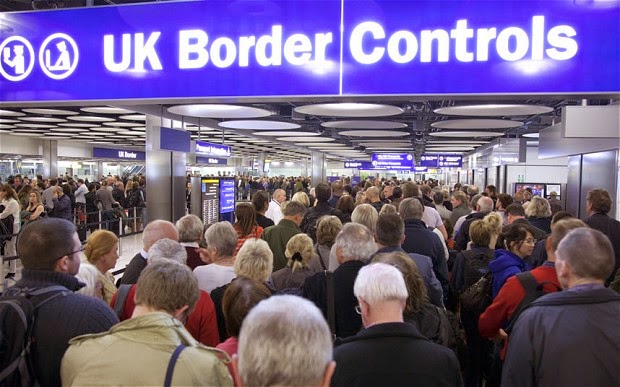 Amid talk of immigration quotas and caps and reductions, we see a lot of numbers kicked around. These would be statistics cobbled together from disparate sources based on a complex methodology, compiled by people in councils and fed up the chain to Whitehall. In light of what we have seen of public sector dysfunction in the wake of Rotherham and Oxford, the likelihood is that any statistics will be the best guess of statisticians working from incomplete and flawed data, using flawed techniques employed by junior and mid-ranking officials, and compiled and crunched by IT consultants who couldn't give a tinkers damn about accuracy so long as the paycheques keep rolling.

So to even approach a mature debate about immigration we would need to first admit we haven't even the first idea of who is coming and going - and more to the point, to get even close to a high quality figure it would require a boatload of red tape, delaying people going about their business, and would cost a lot of money - which is precisely what we don't want, especially since people filling in council forms have an inconvenient little technique known as "lying". Census data tells us very little either since residents are unlikely to report overcrowding in HMOs and landlords won't report beds in sheds.

All we're seeing when politicians kick these numbers around is political theatre and point scoring, none of which gets us any closer to any real answers on immigration.

This blog maintains that tackling the effects will tackle many of the causes of immigration (the pull factor) in that proper enforcement of planning and housing regulations will prevent foreign labour undercutting domestic workers, while clearing up much of the social disruption caused by immigration. As it happens, as with social services, our local authorities are completely unfit for purpose and are failing to enforce minimum wage and gang labour laws and are manifestly failing to tackle beds in sheds and overcrowding. The latter being one of the main antisocial aspects of immigration that prompts so much outrage.

Rather than indulging in petty point-scoring, we need good answers as to why our local authorities are failing so badly and some serious proposals as to what to do about it. None of which we will get from televised leaders debates or any of the parties, not least because they don't understand what's happening and have no interest in looking either. Not even Ukip who professes to care about the issue. What's worse is voters keep falling for the same bogus debate time after time thanks to an unfit for purpose media setting the debate agenda, pushing narratives based on their own infantile understanding of the issues. Most people by now have low expectations of the leaders "debates". I would advise readers of this blog to lower them.
Posted by Pete North at 07:33