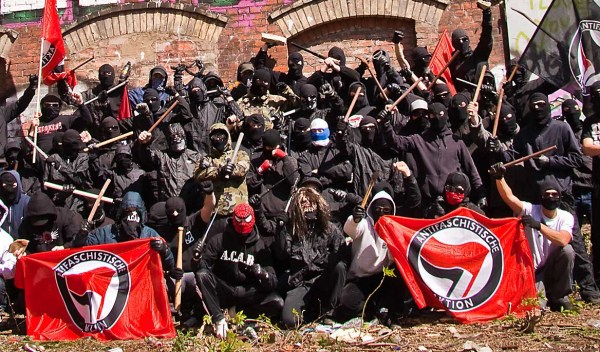 A friend remarked on his Facebook that "antifa" are not the same as fascists. I suppose there are distinctions. Your modern self-styled antifascist is little more than a self-righteous thug seeking to silence views that differ even slightly to their own - to the point of using violence. They are the ultimate authoritarians who believe that the little people need to be protected from harmful ideas, thus crush any semblance of free speech in the public domain.

So while they could not be described as fascist by its definition of believing in racial and genetic superiority, it is still a form of paternalistic tyranny that seeks to deprive ordinary people of liberty and freedom of thought. These are people with a belief system of their own, entirely fanatical in its application and, much like the Gestapo, believe they are the sole arbiters of who has the right to use violence.

Also, like the Nazis, modern antifa does not believe in the right of free association and free, peaceful assembly - a cornerstone of any democracy. That is why we have seen doxing - and when mistakes are made, entirely innocent people end up getting hurt. So these are people do not respect democratic rights. They believe in vigilantism and subverting the rule of law.

History is replete with self-righteous fanatics. The Chinese Communists, the Nazis, the Puritans, the Islamists and now Antifa. The result is nearly always the same. Thought crimes, thought police, book burning. All the usual traits of people who believe their morality to be born from perfect knowledge and enlightenment, thus superior to that of the non-believer. They create places where people do not dare to speak freely.

In the case of America, what we are mostly seeing is spoiled attention seeking millennials looking to broadcast their right-on credentials. A far cry from actual antifascists engaged in investigative journalism, risking assassination and assault. These people are not righteous. They're losers; basically looking to silence a bunch of rednecks for their own moral gratification.

Ultimately a nation that does not believe in freedom of speech is one that basically does not believe in freedom at all. Fascist ideas are defeated through open and frank debate. If you silence them you make martyrs of them. That is how political correctness spawned the alt-right - and that is ultimately what put Trump in office. For some years now, the self-appointed arbiters of what is offensive to minorities have sought to police language, intimidate those with opposing views and stifle free and frank debate.

As much as this is this is anti-freedom, it is also anti-knowledge - in that ideas cannot be shared and developed without robust public discourse. That is why fascists should be free to speak and invited to as many debates as possible so that their ideas face the full force of public and academic scrutiny. Ultimately if you need to use violence and subversion to promote your own ideas - and suppress those of others, then your ideas are worthless.

Moreover, modern antifa is so extreme in its self-righteousness that it happily tars anyone with somewhat pedestrian working class values as goose-stepping nazis - which is actually the same sort of paranoia as any other moralising fanatics. That makes them every bit as dangerous. How long before they become sufficiently powerful that they are loading up the cattle trucks with people?

So no, by dictionary definition, antifa are not fascists - but they share all the classic authoritarian traits. Basically snobby, self righteous zealots. Ultimately we have to trust in the better nature of people to turn their backs on bad ideas. If you do not trust the people, if you do not give them the freedom and space to defend democratic ideals, then chances are they will sympathise with those whose freedoms are being denied - even if they are prize shits.

This is why the vast majority of decent people look at both sides and can't see a fag paper's difference between them. Both ideologies are based on collectivism and authoritarianism. Give either any kind of power and you are soon up to your neck in blood.

These are the thoughts I posted on that friend's Facebook. You won't be surprised to learn that the comment has since been deleted. As Principia Discordia has it, "Members of Orders are just as likely to carry a flag of the counter-establishment as they are of the establishment, as long as it's a flag".
Posted by Pete North at 10:32 No comments: