Farage can't have it both ways 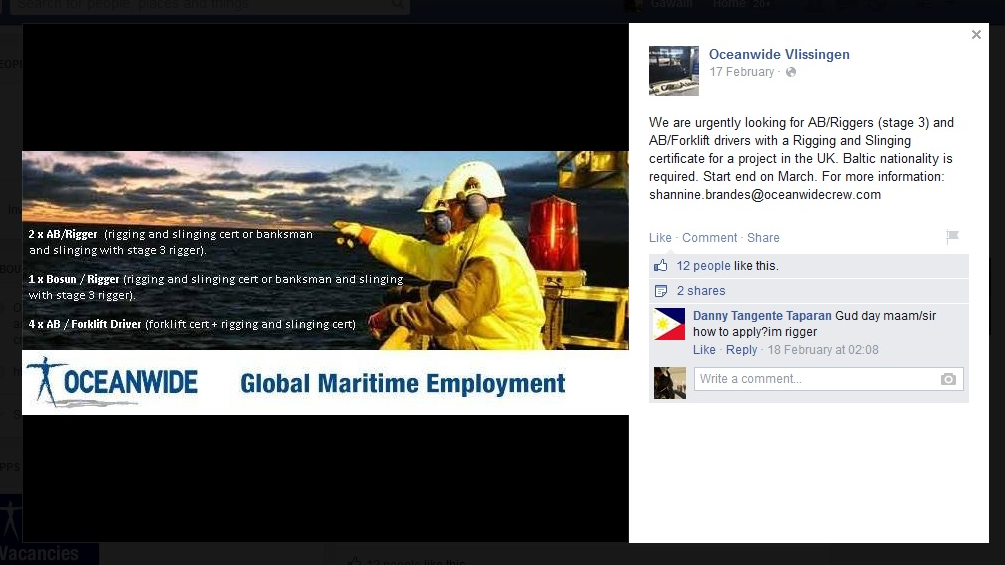 Ukip is on the warpath.

"UKIP today reveal an example of British jobs being deliberately and explicitly reserved for foreign workers. The advertisement for a “UK project” demands that applicants are of “Baltic nationality” was issued by Oceanwide an agency that specialises in offshore work on Windfarms and in the maritime and oil sector. The advert states: “We are urgently looking for AB/Riggers (stage 3) and AB/Forklift drivers with a Rigging and Slinging certificate for a project in the UK. Baltic nationality is required. Start end on March”.

Nigel Farage said, “It is this sort of anti-British worker discrimination that shows the disadvantage that British workers are facing in the jobs market.”

I had a look on Oceanwide's recruitment page. It says "We are looking for AB’s with a Rigging and Slinging certificate and EU nationality". Nowhere on their website does it say "Baltic nationality is required". The only advert I can find that actually says this is here. It is posted is to a Russian language site to a domain in Ukraine, hence the reference, in context, is NOT saying "Baltic only" - it is saying NOT RUSSIAN ... i.e., it is shorthand for saying only EEA/EU citizens.

The link is to Baltic Seamen but is advertising to Russians (and presumably Nordics/Baltics working in Russia). This is a standard format for job posts on Russian language sites. In other adverts, it specifies Dutch certificates to work in Signapore. The post Ukip refers to, probably a cut and paste, dated 17th February appears to have been removed.

In any case Ukip wants you to believe there is a conspiracy against British workers. A quick look at renewable energy jobs boards demonstrates this is not the case. And if Ukip can demonstrate that it is, then they can inform the authorities, what with it being illegal thanks to those pesky... discrimination laws.
Posted by Pete North at 03:45