As bad as we are, we don't deserve our media 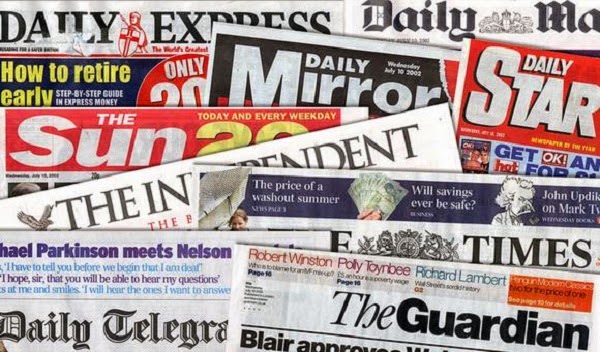 The media we have now is better described as the "controversy industry". Instead of serving the public, it mainly serves their balance sheets and corporate interests depending which has the greater priority in the moment. With its power and financial clout it is extraordinarily successful in freezing out other ideas and non-approved discussions, and refuses to even air contradicting arguments inconvenient to their collective narratives. The censorship is censorship by omission in tandem with its own unified propaganda line.

This works alongside a general dumbing down of media whereby politics is entirely masturbatory - generating toxic controversy for the purposes of entertainment, often giving house-room to the likes of Katie Hopkins. The abandonment of reporting of parliamentary debates and committee work, instead focussing on the biff-bam politics of PMQ's, paints a wholly toxic narrative of how our politics works. It is shallow, dishonest and damaging.

Because of it's crushing monopoly grip, any independent publisher simply can't break through the glass ceiling, except for those who join in and play by their rules spreading the same bullshit that the corporate monopoly media can then parasite off (see Guido Fawkes blog/Conservative Home). Then papers like the Telegraph move in with their own aunt sally blogoshere to kill off independent blogging. And it worked too.

The only people who get a look in are licensed dissenters with the same tribal loyalties - usually from their own inbred circle-jerk think tanks. Columns are awarded on the basis of celebrity status rather than expertise (and who your mates were at Oxford). Unless of course daddy can buy you a column instead of a pony. Few if any arrive there on merit alone, and the moment they leave "prestige" titles their profile drops to zero along with their influence.

The media is no longer functioning as it did traditionally having abandoned any public service duty, and what's worse is the public is simply not willing to look elsewhere for news or analysis, not least because half their news browsing is done at work where corporate internet filters freeze out alternative sources. It controls the debate, feeding in its toxic ideas, and the result is an increasingly ignorant public and a shallow, highly contained debate that actively works against the interests of the public. It's a toxic monopoly much like any other corporate strangled industry.

All the free speech dogma of yore failed to anticipate the heavily garden walled media industry, the shortening of attention spans and the wilful, deliberate manufacture of sleaze - with a desire to bring down governments not for any moral purpose, but because it can. And they're telling me this is an industry that doesn't need intervention.

If asked to choose which was more corrupt between our media and our political class, I would pick the media every single time. The notion that the narrow band of corporate entities with a stranglehold on debate represents a vibrant free media is risible. We would be better served if they were forcibly shut down. If there is any censorious idea killing influence in the public domain it is our media. In the age of the internet, we don't need their pundits or their crass reportage and nothing is served by them setting the agenda. They are parasitic and they are corrosive.
Posted by Pete North at 14:26