Ukip is losing every argument 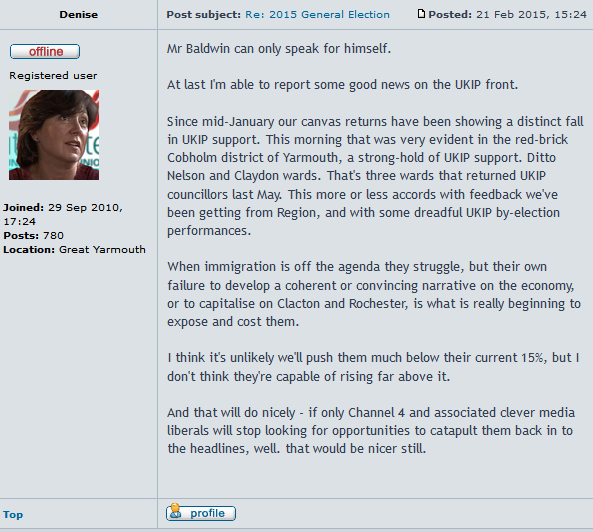 Wherever you look Ukip is losing the argument. Here we see Ukip rejected by nurses and farmers. Nurses have always been a tough crowd to please but Ukip's ridiculous health policy has gone down like a lead balloon. As much as the content is woeful Louise Bours has zero credibility and zero gravitas among the medical profession (or humanity for that matter). That Farage, or anybody in Ukip thought she was suitable for the job speaks volumes about the competence of the party.

As much as any party relies on the media to get the message out, it must also do the groundwork building strong constituencies on the ground - which takes years, and you have to coax them along with policy. Good policy too. Ukip hasn't done this. Nor has it done so with farmers who should be low hanging fruit to Ukip. If ever there was a constituency of people screwed over by the EU, it's farmers. But Ukip's lack of policy and lack of ability to present Brexit as a risk free option has left farmers playing it safe.

This is why, as per the illustration above, Ukip is collapsing. A party built on the meandering of sheep will find that their flock wanders away the moment it becomes unfashionable, and now it stands without a solid base won on a body of intellectual property. Ukip needed Rolls Royce policies. Instead we got a rusty old Cortina arriving years too late.

It is impossible for anyone within agriculture of health to join Ukip and persuade their colleagues on the basis of Ukip policies. It simply doesn't cut the mustard, and anyone who knows anything about the subject will see that Ukip lacks a single clue.

This is yet another reason why the collapse of Ukip is inevitable. Hacks the likes of Matthew Goodwin can't see it because they can only see Ukip in terms of raw data. Like Farage, he mistakes it for a movement but hasn't understood what a movement is (and how you build one). It takes more than tub-thumping speeches projected through the media. It takes groundwork and effort and research along with message discipline and effective communications. It needs to win every argument every time.

Farage drove a horse and cart through all of that thinking he knew better, sabotaging all the good work of many a good Kipper - driving out all of the hard workers and thinkers, leaving only a rump of sycophantic halfwits. Goodwin thinks Ukip is a movement. It's not. It's a passing media fad.

Goodwin thinks that because there is a large constituency of people who would potentially join an effective movement, many of whom are Ukippers, that Ukip is that movement. He's wrong. It does not mean that Ukip represents or owns that constituency, nor has it done the work to win and keep them. It's an empty shell of a party and when the media gets bored, there is nothing to hold the attention of voters. Especially after Farage.

You can spend all day ruminating over the raw data but the real market signals can be found in the streets and in chat forums. These are sources that don't factor into Goodwin's considerations. They can't be crunched by a calculator. If you look around, Ukip isn't winning the arguments, not even on the EU where is has all but vacated the field. It has no community based campaigns or a serious local agenda, and now when it finds it needs to win the arguments to stay in the game, it thinks it can wave a magic wand, pull policies out of a hat and everyone will come flocking. It doesn't work like that.

Here is where years of dedication and hard work would have paid off. Here is where an effective strategy would have paid off. These are the tools needed to survive the trial of fire. But now that ship has sailed and there is nothing Ukip can do to turn back the clock. Now is make or break time, and here it stands, completely naked in full view of the public. All it has is a litany of excuses. That is Ukip's reward for Farage worship. I would so like to be a fly on the wall when Goodwin realises what a pillock he is. Not that he'll realise it. These bubble-dwelling idiots have no self-awareness.
Posted by Pete North at 17:48