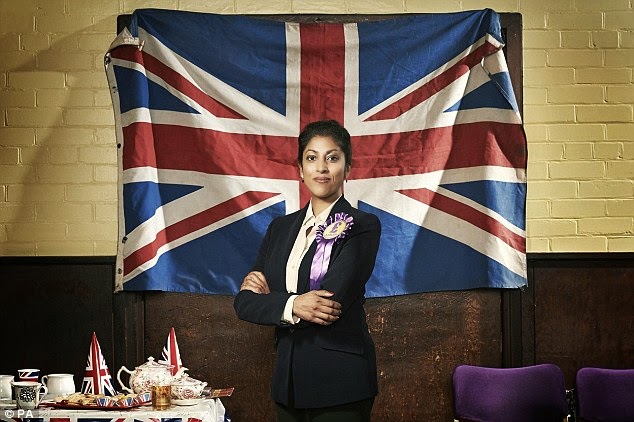 As I have found with my quasi-anonymous Twitter account, the best way to get Kippers to reveal their stupidity is to goad them with bait they simply can't resist. It seems Channel 4 are getting in the act with a Spinal Tap style docu-drama. And Kippers aren't very happy about it.


"The row has blown up over a drama-documentary to be screened at tomorrow which imagines life under a Farage government. In Ukip: The First Hundred Days – which mixes acted scenes with real news footage – border guards are seen forcibly repatriating illegal immigrants amid race riots, as the UK prepares to pull out of the European Union."

"The film is seen from the perspective of a fictional Ukip MP, Deepa Kaur, the only female Asian in the Parliamentary Party, who is asked to defend policies such as raids on businesses suspected of harbouring immigrants. Kaur, played by Priyanga Burford, is tipped for a Cabinet post but faces furious demonstrations when the largest employer in her constituency is put out of business by Farage's decision to pull Britain out of the EU."

It will of course bring out all the best lines from the Ukip Silly Phrases handbook about the "LibLabCon quaking in their boots" and such. It is that idiocy that will do Ukip the most harm, not the programme itself.

Course this programme is all deeply silly stuff which is bound to have very little material impact. The main body of viewers will be Kippers, who tend only to tune into news about themselves. Such is the way with cultists. But one might say Channel 4 missed the boat on Ukip ridicule. The job is done, the public know who and what they are and that is reflected by recent polling. It's come a little late and the public are no doubt as bored of this "rise of Ukip" nonsense as I am.

Were I to read any serious lesson into this, it would be that Ukip, namely Farage, has invited such silly speculation because the party still stands naked without policy. We don't know for a fact what Ukip has in mind for an immigration policy but for a few vague sentiments about a points based system. The party material is all nicely sanitised, but the behaviour and attitudes of Kippers is there for all to see on Twitter. Who knows exactly what they'll dream up?

Similarly the point about businesses closing down due to Britain pulling out of the EU is a valid one if not handled correctly. There are ways and means to do it, but Ukip seems to think it can be done by ripping up treaties and unraveling decades of integration with a royal commission over just two years. This is a silly fantasy of theirs, and there are no indications that intelligent policy is being handled by anyone competent.

This Ukip sentiment of "common sense policy" is basically pig ignorant anti-intellectualism which is blind to complexities and nuances. Add that to the quasi-fascist rhetoric of late and the cartoon version of Ukip is personified by this programme quite well. I fully expect that if Farage ever were PM, surrounded by the kind of halfwits he has in his entourage now, we would see banks and business running for the exit, and I wouldn't blame them. Ukip's whimsical fag packet policy making is simply not a serious prospect for government. But then if we're talking about serious prospects, the very idea that Ukip will ever win power is the daftest fantasy of all.

Nobody at Channel 4 thinks Ukip will ever win power, and nor does anybody sane, but what this programme will do is trigger Kipper outrage, which is always seriously funny - and Kippers will fall for it hook, line, sinker and copy of Angling Times. The programme won't be entertaining, but the reaction of mouth-breathing Kippers will be hilarious. I'd better dash out for popcorn.


UPDATE: A Kipper commenter on the Daily Mail calling themselves "Ukip4me" chimes in with "If you find this programme offensive then I hope you all make a strong formal complaint to Offcom, as I will."

How often do we hear bleating about "offend-a-trons" from Kippers? The so-called free speech party wants to silence Channel 4. I am Pete North's complete lack of surprise.
Posted by Pete North at 20:52