The first 100 days: Wailing and gnashing of teeth 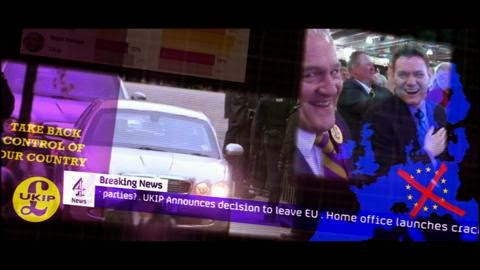 As predicted the Channel 4 programme on Ukip did exactly what I said it would. Kippers are now busy sharing change.org petitions and writing to Ofcom. Course, they all screamed blue murder when greenies did likewise to The Great Global Warming Swindle by Martin Durkin.

I didn't actually watch it since I was more interested in the Twitter reaction than the programme itself. One doesn't even need to see it to know what would follow. Kippers have shown absolutely no self-awareness.

The programme is a quasi-satirical polemic and a debating point. It's not supposed to be even handed. It's a discussion piece. Channel 4 has always made programmes like that, not least the alternative Christmas day message, and has always greatly contributed to the national debate. This is an example of Channel 4 doing what it does best.

If it was pushing the boundaries of good taste then Ukip deserved it. It's a cartoonish extrapolation of the vibe they have created. For instance, there are ways and means of leaving the EU. To do it in a rush without a proper roadmap would be a disaster. A careful exit plan on the other hand could make the process fairly harmless. But Channel 4 were left to speculate because Ukip does not have a Brexit policy. All they have to go in is Farage's brainless pub-bore rants and the reactionary nature of his moronic entourage. In truth, if Farage ever did win power it would be on the back of a massive populist wave which would give it a mandate to go on a wrecking spree, and it would display its quasi-fascist anti-intellectualism by ripping up treaties and that probably would cause an economic disaster - and we'd probably see riots too. Really, Ukip cannot complain, because they were repeatedly told they would need detailed policy, long before the election, they refused to listen and blocked anybody who dared to criticise Farage - and then denied the need for policy, merely stating that nobody else had released a detailed manifesto either. A point still made by Kippers in the comments of this blog. So really, if the media rip them to shreds I have absolutely zero sympathy.

Some argue it's unfair and the media needs to demonstrate equal scrutiny to all parties. They don't. All of the other mainstream parties have held some degree of power in living memory so we know roughly what we are getting - continuity politics and the status quo. Ukip is presenting itself as a new contender who wishes to overthrow the political consensus. That's fine, there is certainly an appetite for it, but it has to step up to the plate and demonstrate why it should be taken seriously as an alternative. Thus far all it has done is pointed at the other parties and said "we're not them", which is not a sound enough basis for other-throwing the status quo. Consequently everything Ukip does should be closely scrutinised disproportionately so the public can get a full understanding of that which they are being asked to vote for. A discussion polemic of this nature starts a thorough debate about who and what Ukip is and what it stands for. The debate that follows will finally answer all the questions and it will reveal what we have known all this time... It is a house built on sand.
Posted by Pete North at 17:18