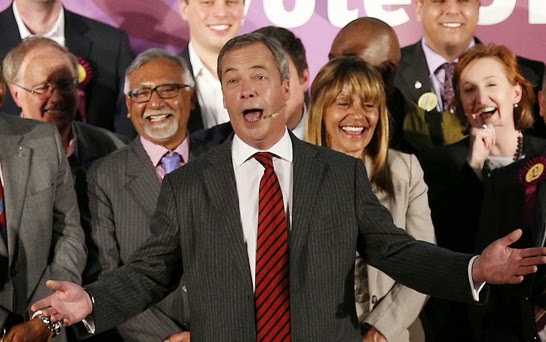 Why a bog-standard Farage pub speech, pregnant with BNP rhetoric, has made the front page of The Telegraph eludes me. It's not even worth a fisking. It will sit well with the home crowd, but it adds nothing to the rhetoric we have already heard. All we get is a a new soundbite that Ukip is a "state of mind" (and apparently the main parties fear it). On this Farage is about right. Ukip isn't a party, it's a pathology.

Look at any attitude survey and Kippers are the most pessimistic, most paranoid, most miserable and most angry. It is a particularly British brand of anti-intellectual curtain-twitching fascism. Is has no agenda or principle. It's an all singing, all dancing crap-at-the-world; the anguished cry of the pathological loser. That's why it has nothing of substance to offer.

That Farage can scribble down these catchy riffs in half an hour or less speaks to the emptiness of their message and the shallowness of the man himself. It is a narrative of persecution, whereby the brave British working man is crushed underfoot by external forces - banks, Muslims, "the elite", Multiculturalism, you name it. It's all there - a bingo card of classic fascist tropes.

Since this is billed as a major campaign speech, you might think it would coincide with some sort of manifesto. It's smelling very much like one is not going to materialise, and instead we will get a shining new excuse as to why the "new" party doesn't need one. That might actually be an astute move. If whatever they had in 2010 was "garbage", there is little hope that a cobbled together effort at this stage will be much of an improvement. Place your bets now.

In that event it will be billed as political masterstroke by our coprophagiac media who lack any ability for critical scrutiny. They will mistake Ukip for a political party or a coherent movement and measure it by that criteria - as usual. This is why their shallow analysis is routinely and uniformly wrong.

A classic example of this is Rafael Behr in yesterdays Guardian where he argues Britain’s mainstream parties living in fear of making semantic gaffes might give their enemies a tactical advantage. Like his media colleagues Behr reads the Ukip response as a tactical maneuvre rather than the knee-jerk reactions of a disorganised band of fools caught like a rabbit in headlights whenever Farage opens his mouth.


It is a climate in which the artful maverick flourishes. Nigel Farage’s political gift is to speak as if without internal censorship. His views appear to pass from impulse to mouth without being security-vetted by a press office in the brain. It is how most people speak most of the time, but not most politicians.

This is because Ukip has no message to contrast against the utterances of their leader. There is no intellectual capital to vet it against. His views appear to pass from impulse to mouth without being security-vetted because that's exactly what they are - impulses. Nor does Ukip have any mechanism of coordinating a message even if it had one. Ukip is not a party, it is a cult, and their policy is largely whatever Farage's impulse is. That is not "a gift" - that's just bloke-in-pub opining. "artful maverick"? - Tosh!

While Behr doesn't see the need for message discipline, Ukip is a prime example of why a modern party needs it. It's true you can't have message discipline without a message, but without either, you have idiots going off in all directions making up policy on the spot and looking like total amateurs.

That's one of the main reasons Ukip isn't taken seriously, it is why Ukip have failed to break through their own glass-ceiling and that is why EU referendum poll margins are a wholly independent variable to Ukips popularity. Yet the hacks still opine on the "success" of Ukip. It's bizarre. Ukip is not succeeding by any measure, even with its own yardsticks. It has failed to break out of its demographic cul-de-sac, it has failed to widen its appeal and it is not winning the argument on the EU - and far from being an asset, this "plain talking" is precisely why Ukip is a national laughing stock. No message discipline, see.

Like Ford and Goodwin, Behr expects it to behave as a normal party would and is surprised when it does not. When you view it for what it actually is, a nihilistic miserablist cult of the leader, nothing it does surprises. It's why this blog continues to call it right. You don't need a crystal ball to predict Ukips future.
Posted by Pete North at 02:24