Carswell: getting it wrong Ukip style 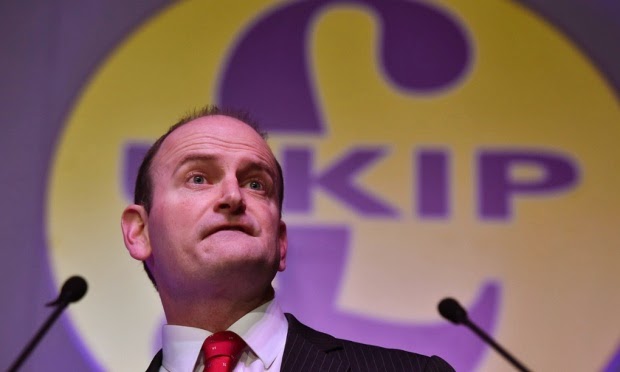 Douglas Carswell is acutely aware that his mouth-breathing compatriots are a liability. I think if he'd understood Ukip and thought this far ahead he wouldn't have defected. Like everyone else, he mistook it for a political party. But the poor lad can't admit that now. The deed is done. Here we have him setting out his stall on what his agenda would be for Ukip. He knows the immigration schtick will wear thin and that Ukip needs a better platform if the party is to escape from the cul-de-sac.

It's a waste of breath because the party will continue to bang whatever drum Farage is beating and he'll be out there on his own with his electoral reform agenda until such a time as he inherits the party - by which times such a colossal shambles will be beyond repair. Not that it isn't already. Moreover Farage has stated this weekend that he will continue to lead Ukip for the long term - so it rather looks like Carswell is going to be out in the wilderness for a long time unless there is a coup. I'm not sure Carswell has the stones.

But let's suppose for a moment that Carswell inherits a party and not a demented rabble. Sometimes having only part of a clue is worse than having no clue at all. Carswell said "fundamental change was needed to reconnect politics with the public". In that he's not wrong but if there is a wrong end of the stick to grasp, he will grasp it with both hands. He insisted voters should be able to sack their MPs between elections, and argued that Commons committees should have to sign off on ministerial appointments – as happens in the US.


It's easy to see what he's getting at. As we outline in The Harrogate Agenda, typically, there are around 140 ministers, whips and other office-holders in the Commons. Collectively, they are known as the “payroll vote”, people who may be assumed to vote with the government, and to defend it policies and actions. But the problem is far worse than this basic arithmetic would suggest. Add the Parliamentary Private Secretaries (PPS) and the “greasy pole climbers” who have hopes of preferment but have not yet been promoted, and the number climbs to 200 or so on the government benches. When it comes to holding the government to account, all these people are compromised.

Even then, this is by no means the full extent of the distortion. The fact that the Commons is the main pool for recruiting ministers - and the only prime ministerial pool – also changes the dynamics of the institution. A goodly number of people who enter parliament have no intention of remaining MPs for their entire careers. They want to join the government. For them, parliament is not an end in itself, but a means to a different end, the first step on a career path which ends up in ministerial office. This should not be the case.

We thus concede the obvious - separation of powers: ministers and other office holders cannot be members of parliament. If members become ministers, they must resign as MPs. As a consequence, prime ministers must appoint their own ministers – from whatever source they choose – subject to parliamentary confirmation and dismissal. This has the added advantage of widening the recruitment pool. But nothing so radical from Carswell. In Carswell's model MP's are merely rubber stamping their own ministers. What this actually solves escapes me.

Carswell goes on to assert that parliament is a fix. A cartel. “Too many MPs become MPs by working in the offices of MPs. We want to open things up. We want MPs that answer not to party whips, but to people. That is why we want to bring forward a proper recall bill to give voters the power to sack their MP. Unlike the coalition’s ‘sham’ recall legislation, the Ukip plan would trigger a local vote if 20% of the electorate signed a petition.”

The recall bill he proposes is merely decoration. It's unlikely it will be used but for the most dreadful of offenders, but could actually be used as a vexatious means of removing perfectly good MPs. Assuming you could devise a recall mechanism immune from abuse, it's still a fairly pedestrian measure and hardly radical. Open primaries to improve the range of candidates in seats is certainly no bad thing but his own party certainly demonstrates no commitment to this principle. There is nothing stopping any of the parties doing this without legislating for it, but as it happens, they don't, not least because governments want their own people in ministerial positions. Separation of powers actually eliminates the necessity to parachute in PPS clones. Carswell simply hasn't thought it through.

Not only that, there is a gulf between perception and reality. Very few candidates are central party appointments, and when they are they are often rubber stamped by the local party association. Moreover, plenty of MPs are perfectly ordinary people and frustratingly so. I would argue it's the lack of exceptional people in parliament that makes our parliament so utterly unbearable. Is anyone seriously telling me the likes of Jo Swinson represents the iron fist of the elite?

Stressing the problems of safe seats in the current first-past-the-post voting system, Carswell said change should not be ruled out because the alternative vote system had been rejected in a referendum. He said: “If we are serious about choice and competition in politics, I think we need to think seriously about electoral reform. Just because Nick Clegg’s idea of AV was a bad idea, just because the Liberal Democrats are such a bad advertisement for reform, doesn’t mean we can’t do better.”

No doubt we do need to think seriously about electoral reform. Carswell hasn't. AV didn't win out because it's incomprehensible. The common man has absolutely no idea how it works. Even I go cross-eyed halfway through reading even the simplest definition and the fact it has been resolutely rejected in a referendum (67%) is a pretty clear signal that it should be ruled out.

In The Harrogate Agenda, we view our six demands as an integrated package of reforms rather than tinkering around the edges. It is real local democracy that will tackle the rotten boroughs and the safe seats. What's needed is a revolution in our relationship with government and that is what will breathe new life into our democracy and get people engaged again. All we see from Carswell is a mixed bag of unconnected measures, half-formed and only half understood. What's more, the "establishment" could quite easily nick his ideas, ram through a couple of sham bills and steal his thunder - and it would be no real threat to the status quo, once again leaving Ukip standing naked.

If anyone thought Carswell could be the white knight who will save Ukip they're in for a big disappointment. What we see is pretty much typical Ukipism. Timid, bad ideas dressed up as radicalism, presently badly by someone who hasn't understood the problem. Kippers might fall for it, but it lacks the ambition and credibility to form the basis of a real movement. It's just not a big idea and it's nothing to write home about.
Posted by Pete North at 16:27