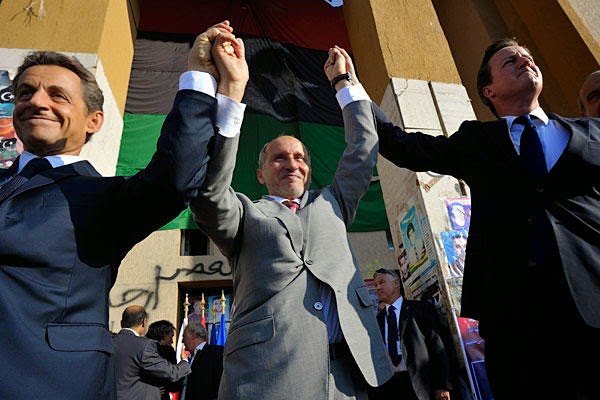 A fine piece by Tim Black appears in Spiked today on the asinine NATO intervention in Libya. Tim Black is always worth a read, and in matters of the Middle East, more so that his esteemed editor. I urge you to read the whole thing. Black concludes: "Now that we can see just how deeply destructive this moral posturing is, there needs to be a reckoning, a meaningful debate about the dangers of Western intervention in other people’s affairs."

Well, something we're not afraid of on this blog is debate, so a debate we shall have where I shall attempt not to be wrong about everything. Tim Black's assessment is pretty damning. But there are a few 'what ifs' to consider. As Black notes, this intervention was an opportunity to be seen to be doing the right thing. But what if that's all it is? A figure I keep repeating is that in over ten thousand combat sorties, only 73 civilians were killed.

From this we can either deduce that we have reached the very pinnacle of accuracy and surgical strike capability from long range aircraft (as if), or that we actually hit bugger all of any significance, and the whole jamboree was a flag waving exercise.

The latter is not so far fetched. Looking at Typhoon camera footage (not an entirely reliable sample I give you) we see a collections of sheds on military bases being mercilessly flattened, but very little else. It is entirely possible that we barely influenced the outcome at all. If that is the case then the intervention was all the more fatuous in that we affected nothing but still take all the blame.

But it is also worth remembering that these grim little dictatorships do inevitably end in war and tribal feuding as various tribes compete for the crown. As a reader remarks on an earlier piece, such dictatorships naturally results in an overly centralised and very powerful state - a prize worth fighting for, and fight they will. Not for any lofty ideals on behalf of a people in the process of self-realisation, but to become the oppressors themselves. Often it is not the dictator but the dictatorship that creates the international tension.

This is all very well if you are a member of the winning tribe, but not so great if you are in the minority as many Egyptians found out soon after their revolution. And certainly if in a power vacuum a large quantity of Western supplied weapons are stocked up in military bases, it then becomes a race to take ownership of that very same stockpile, and whoever takes control of the military facilities dictates the next generation of politics - which will look much the same as the last.

So if the "overall brutalising force of Colonel Gaddafi, which had maintained order for so long" is no longer there, does that not then level the playing field ensuring that whatever replaces the regime does so through consensus, rather than seizing the mechanisms of state? Does Tim Black think that uninterrupted oil production and "stability" under an oppressive regime is preferable to the chance to fight it out? There's a debate in itself.

Black complains that there is now no longer a a central source of authority, and no prospect of order, in this fragmenting territory. I think perhaps a debate is needed as to whether that is necessarily a bad thing, given that these nations exist only as a result of a political official drawing lines on a map, long ago - usually for the convenience of the West.

Perhaps it is time for them to redraw their own borders and territories as Iraqis evidently are now? Perhaps destroying these artificial political constructs from the Twentieth Century is the much needed revolution that the Middle East has needed for so long? But I know what Tim Black would say to that. It's not our place to make that call.

On the other hand, by inaction, and thus maintaining a central authority, that may mean one dictatorship is rapidly replaced with another, perhaps much worse. There may well be circumstances where that is most definitely not in our interest and not in the regional interest either. What then? Do we in the West have to come to terms that we must sit on the sidelines and watch a bloody massacre? How many is too many? Does it have to become a holocaust before we act?

This of course is ascribing a level of thinking to a circumstance where none was applied, and I wholly sympathize with Blacks view that this was wholly a vanity adventure. But just supposing we had statesmen capable of any such thinking, these are the issues we would have to grapple with.

The problem is that whatever we end up doing (or not), the West inevitably gets the blame, and since in any war there is always a loser, there will always be someone around to hate the West for what it has done (or not done). So unless there is a direct material or security interest, it doesn't seem like there is much to be said for intervention.

There was never a good material, geopolitical reason for getting stuck into Libya as Black observes. In fact, for an economic region already struggling with the immigration impact of the Arab Spring, it's fair to say that kicking off a new exodus to Southern Europe was actually pretty stupid.

But that is not to say this should not remain an open question. As much as our failings are to do with a poverty of intellect, it is also to do with military ineptitude. Had our military not allowed the situation to disintegrate in Iraq as fast as it did, who knows what we would be looking at today?

But it is now a far stretch of the imagination to a scenario where we would have both competent military and intelligent political leadership. In the Western idiocracy there is more chance of a unicorn becoming Pope. I think before we poke our noses into the revolutions of others we should perhaps have a little one of our own.

Ultimately, the world will never conform to our own ideals and we will always have to, on occasion, act in the national interest by doing business with regimes holding agendas that contradict or compete with our own. We have seen with Turkey we can affect far more effective economic ends with development aid (bribes) than we can with military force.

It turns out a new sewer system in Ankara paid for by Britain went a long way to Turkey taking a quota of refugees. Sure it cost the better part of a hundred million, but that is only 100 Storm Shadow missiles we would otherwise have launched at empty sheds on Libyan  military bases. But there is always a moral trade off.

It is interesting that the narrative of the Left was always that it was wrong to deals with the devil, enslaving people in the process. Now we are confronted with the realities of what happens when we don't, and choose what is notionally the right and moral thing to do, people are suddenly a lot more squeamish about removing the evil bastards who hold insurmountable power over so many, then resign themselves to the status quo. And who can blame them?

In conclusion, there's not much for to disagree with Mr Black on this one, and unfairly he cites Matthew d'Ancona as being in favour of liberal intervention, so by default anyone with an IQ above that of a turnip must gravitate toward Tim Black's position.

But there is one thing I do know. The world is a topsy-turvey place with little room for absolutes. For now, it is beyond our grasp to affect political change through military might, and it doesn't seem to do anybody any favours. But we must always be aware that non-intervention also has a price and what we do about that has just as many thorny questions. There are certainly no easy answers and no uniform rules.
Posted by Pete North at 14:36