Creeping antisemitism or just run of the mill stupidity? 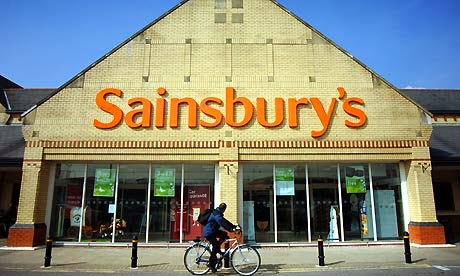 As we digest the news that a Sainsbury's branch removed its stock of kosher foods, many are crying antisemitism - and how this is a portent that the spectre of antisemitism is raising its ugly head once more. I'm afraid I just can't get all that excited about it.

One should never read deeper motives into something which can better be explained by run of the mill British stupidity, or a lazy reluctance to cause any immediate bother. Keep in mind this is a Sainsbury's. It is not the front line in a battle of ideas, nor is it part of a broader culture war. They sell bread, baked beans, fags and the occasional fine malt.

Nobody works at Sainsbury's because they aced their exams, save for the odd student, and I'll bet nobody halfway through a seven hour shift on the tobacco counter particularly fancies having a debate on human rights and global trade with a bunch of left wing arse-clowns who will probably make a scene and kick off. That means spending the rest of your shift giving statements to the plod and missing the bus, meaning you have to take the later bus, the busy one, and be forced to sit next to a piss-sodden tramp who shouts at pigeons.

"It was an isolated decision made in a very challenging situation." says a Sainsbury's spokesperson. I'll go with that. Insomuch as the Left make clowns of themselves crying "genocide" whenever a Hamas goon suffers so much as a papercut, the right does itself no favours by crying "creeping antisemitism" at every moronic gesture that makes it as far as Twitter. It's rather like those Daily Mail reports where a park warden issues a fine to a small child picking daisies (or something equally cretinous) and the following day we are treated to a Richard Littlejohn article explaining why this is the final stop on the road to becoming a fascist police state. Bleh!

O'Neill in The Telegraph is grinding this particular axe in his usual inimitable style, but if it's ok with you, I'll sit this one out until I see something more substantive. That the deranged Free Palestine mob keep finding impressive new lows is not exactly news to me - and they have much to answer for, but I don't think we'll be rounding up the Jews into cattle trucks any time soon. They're way down the list after parents who take their children out of school during term times.
Posted by Pete North at 07:58