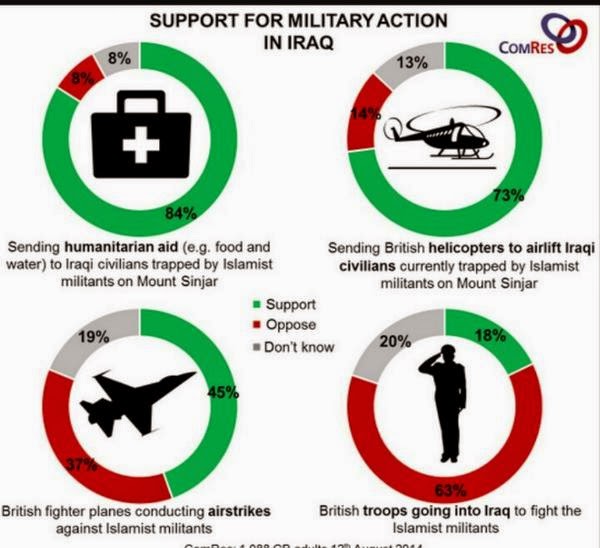 Yes, yes, I know! I'm being obsessive again. But it's on a different subject. This is how we Aspies work. So yet again I come back to Spiked and the subject of intervention. But hear me out.


The situation in northern Iraq is dire. spiked’s position is this: emergency humanitarian aid must continue to be delivered, and we won’t particularly lose sleep over the emergency American airstrikes against ISIS positions, to the extent that they might in the extreme short term allow the safe fleeing of people under threat.

So here we have a reluctant admission intervention of a sort is sometimes necessary. But where is the line drawn? Air strikes of this nature may take some people out of immediate danger, but without persistent air surveillance, there is nothing to say that ISIS will not advance further. And soon enough, we may find that Kurds are in immediate need of emergency humanitarian support again.

There is no political possibility of involving Western ground forces. Nor do we have the capability or the political capital. Up with this we will not put. But what does one do when the Kurds are running low on ammunition? The reason they are running low on ammunition is because the West has been reluctant to arm Kurds, because that is contrary to our geopolitical interests in keeping Turkey as an ally, and not provoking Iran into further meddling in our local agendas.

Kurdish statehood ambitions include a rather large chunk of Turkey, Syria and Iran - and Kurds are not shy in the pursuit of that agenda. But in the face of a well armed Islamist death cult we have started to arm the Kurds, presumably with tacit consent from Turkey. But we are now heaping weapons on a militia considered by the US to be terrorists.

Of course, it's ridiculous to talk about Kurds as a homogenous group and a single demos, but tribal and political alliances can turn on a sixpence there so there is good reason for caution. We know that Turkey is not wholly supportive in that the RAF Tornado GR4s are only flying reconnaissance missions in support of the evacuation effort. They are not granted overflight permissions if they carry weapons. So if anyone is to fight off ISIS, it is going to have to be either the Iraqi army, or the Kurds themselves. As much as it is the only realistic political route, it is the only desirable one.

But what does one do when the enemy is a well armed militia carrying quite a lot of Western weapons, inadvertently gifted to them by the West? That then is a strong case for intervention in a material sense. If we are going to create a bunch of fanatical Islamists and arm them, then they go after the Kurds, it's only fair and sporting if we give the Kurds the means to defend themselves.

This is where we get into the murky waters of "responsibility to protect". But then the editor of Spiked is fairly absolutist in his view of humanitarian intervention.


“humanitarianism” is based on the fundamental idea that foreign peoples are weak, that they are victims, and that they need the patronage and assistance of the international community. In this sense, “humanitarianism” is the polar opposite of humanism. Because “humanitarianism” emphasises people’s weakness and their need to be saved. It rehabilitates, in politically correct language, the old idea of the White Man’s Burden. Humanism emphasised people’s ability to understand and control their affairs – humanitarianism flags up our inability to do that and our need for continual external assistance.

The difference here being that the Kurds are indeed very weak. They are indeed victims. And for now, they definitely do need the patronage of the international community lest they be slaughtered and beheaded and permanently removed from the landscape.

Of course, the concept of humanitarian intervention is very much tainted by the strong suggestion that the US indirectly supplied arms to Islamist groups in Libya and that the humanitarian smokescreen crept into a regime change agenda on sketchy legal grounds.

As a passing note it is interesting that George Bush goes down as the Great Satan but Obama, having been bounced into it by war hungry Euro-elties hijacking NATO, he has done exactly the same thing in Libya. And so how then can we even begin to trust those same players not to make a similar or bigger destabilsing mess this time around? We can't.

But then the alternative is to sit back and watch as thousands of people are massacred. The West won't put up with that either. So like it or not, if the cry is "something must be done", then something must be done. That is the nature of democracies. Though you will see from the graphic above, that something certainly does not extend as far as intervention by ground forces.

There is still the possibility of a resurgent Iraq now that Maliki has been given the boot and we may yet see the Iraqi army come back into play if Sunnis are brought back into the government. If that happens then ISIS will be turning tail (as they seem to be doing). They are opportunists, not crusaders. In that event, Baghdad will have reasserted some authority and we may see a great deal of improvement from Iraq having successfully managed a non-violent transition of power and having overcome a constitutional crisis - without very much involvement from the West.

That then may put the Iraq intervention in a whole new light when contrasted with the even bigger disaster that is Syria, which didn't need much of a push from us to get the fire started.

But if you were looking for any kind of consistency in approach, don't bother. And if you were looking for any kind of decisiveness or consistency from me, don't bother either. It isn't there. While some people like the comfort of certainties and absolutes, I'm fairly comfortable in saying I haven't a clue. We must take each case as we find it, and judge each case on its respective merits, always being mindful of the national interest. Somehow I do not think it in the national interest for the world to see a massacre in the wake of a disaster we created. As to what we will do in Libya, that is a whole other debate.
Posted by Pete North at 15:27