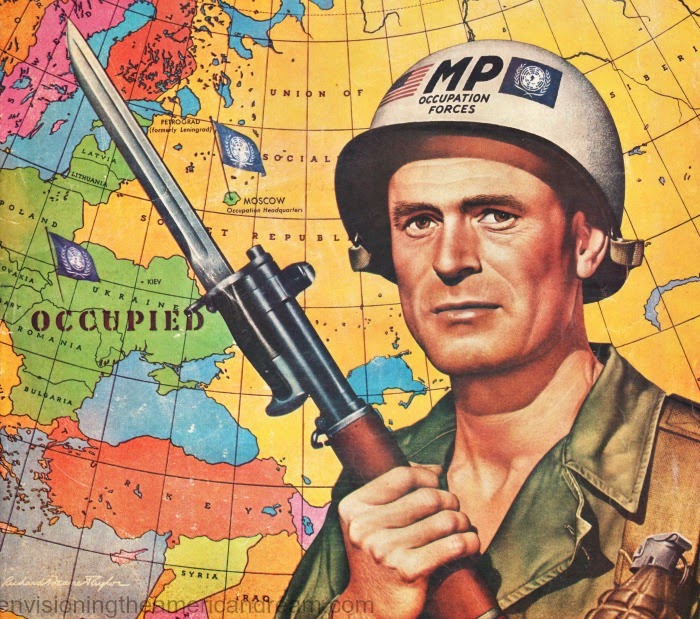 There have been more than a few people saying "never mind this, what about that" when it comes to our focus on particular conflicts. It's not an unfair thing to say. We have all the news media reports we could possibly want from Libya, Gaza and Iraq, much of which is close enough to the truth to be able to extrapolate a good picture of what is going on. Ukraine is another matter.

What we know is essentially repetition of local news sources, much of which is highly questionable. So inept is our media that if there was something of international significance happening there, they wouldn't realise it. Ukraine is being left to fend for itself while much larger games play around it.

Ukraine is becoming the epicentre of a phoney cold war. Today the BBC makes passing reference to a US submarine being "expelled" from Russian territorial waters in the Barents Sea on Thursday, and we have reports of a NATO surveillance aircraft violating Swedish air space to avoid detection. Meanwhile RAF Typhoons are patrolling the border of Russia from a base in Estonia. We don't presently know what the USAF is up to.

What is happening on the ground in Ukraine is less important to either major power than the heightened military tensions between them. The consequences of which are significant because it dictates what Russia does in Syria, which has ramifications for the IS crisis in Iraq. That is why I suspect US military efforts are restricted to PR flights, dropping expensive bombs on worthless targets.

It looks like the US is engaged in "show of force" flights as a deterrent to ISIS, but is showing no sign of engaging them in any meaningful way. This is the same, but more stringent, non-engagement strategy used in Libya, whereby the presence of NATO air assets, along with an implied threat of deeper engagement, will be enough to protect Yazidis - but not threaten ISIS.

As much as there is a reluctance to be mired in an open-ended conflict, sucking us into the Syrian war (for all the obvious reasons), one suspects the reluctance is not unrelated from our present relations with Russia - which are in part a consequence of what we did in Libya as much as Ukraine.

It seems there is no political will to assist Iraq in defeating ISIS at all. This is evidenced by the US not coming forth with the logistical support to mount a proper counter-insurgency air campaign with correct tools for the job.

This is all about presentation, which our media cannot see past, and everything we are seeing from various conflicts is all connected. The lack of grand pronouncements from the "international community" over Ukraine has much to do with diplomatic caution. Condemning Israel for its incursions does not have the same degree of geopolitical consequences, so it's an easy hit, but the messages between NATO and Russia are all subtle but significant gestures.

It has gone beyond a war of words. The body language of the dialogue is the type and class of military equipment deployed, but because our self-satisfied commentariat consider such detail to be unimportant and geeky, all we get are lazy assumptions, hyperbole and distorted narratives.

What is happening around the edges is perhaps more important than what we are paying attention to, and perhaps what others feel we should as well. A tokenistic and superficial nod to the humanitarian situation on the ground in Ukraine is merely to salve our own guilt for indulging ourselves in more familiar conflicts, but a more nuanced and sophisticated look at events is necessary.

There are deadly games afoot, beyond the comprehension of our media, and seemingly our infantile politicians think this is all just about saving innocents in far away lands from evil men. We are looking at wristband foreign policy pursued by amateurs against a foe we continue to unthinkingly provoke. The threat posed by our own leaders is far more grave than a rag-bag bunch of Islamist looters.
Posted by Pete North at 06:40