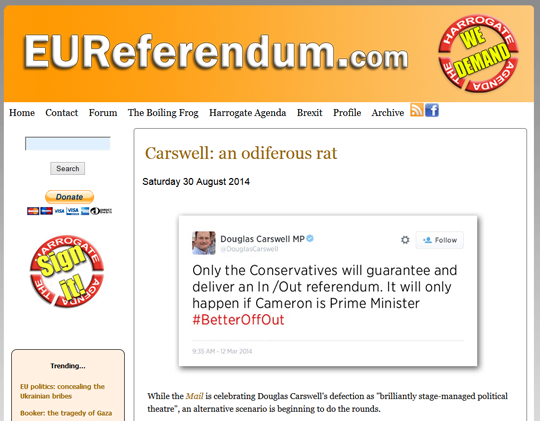 Growing a blog is a difficult thing to do. It requires persistence, self discipline and a lot of brutal hard work behind the scenes. The work Richard North and I did on the Somerset floods took weeks of solid investigation, consulting experts and locals alike, and cost money to go to the scene and evaluate just how little our media had noticed as they were guided around the photogenic spots, but lacked the critical skill or the time to investigate.

Similarly, my work on Israel is not the level of drive-by commentary offered by our media. Our criticism of the recent operation is informed by our evolving theories on counter insurgency and asymmetric warfare, of which we are not altogether unqualified to speak on, by way of spending more hours on this than most people spend at their day jobs. And we both have day jobs.

Both Richard North and I always look at a debate and look for the missing dimension, and sometimes this means splitting hairs that are not split. By doing so we often discover significant nuances that can often paint any current issue in a whole other light, especially when you pay closer attention to the history. This is what we are both trained to do.

Dad in his capacity as a public health specialist is a trained forensic investigator (and an accomplished one), in which he holds a doctorate, and I am an analyst with a particular niche in examining human behaviour so as to improve productivity. I presently work in aerospace and defence and have for some time, but have worked in utilities, public sector, banking and asset management. Between us we make a pretty good team with a broad array of experience to draw upon. At the very least it cannot be said that either of us are thick.

There are of course short cuts to growing a blog. We have seen bloggers come and go in no time, who trounce our hits even on a good day. If you suck up to the right people, align your blog to a party or cause and repeat dogmas without addressing inconvenient nuances, you will rapidly attract an audience of people who wish to be spoonfed their opinions, or have their own views mirrored back at them. There is a game to be played and there are rules - and it's not a game we play.

I rapidly learned this same lesson as a DJ, where I know full well that my live original material gigs were terrible, but I had a large world wide following of people who still refer to my vinyl mixes as being the state of the art for the time. Given the amount of effort that went into them, they bloody well should have been too. But getting the gigs was always difficult. You had to be in London, you had to be talking to the right people and you had to be out there all the time sucking up to promoters who you otherwise would not give the time of day to. I wasn't willing to do that to promote my music, and I'm not going to do that to further my writing.

I have had some articles published whereby the editorial slant and word limit meant being less specific than I prefer to be, and the main insistence on all of our blogs is that details matter, and in that, there are no shortcuts. Consequently, I don't see myself ever writing for another publication however original the work.

The recent Gaza conflict has chucked up the usual firewall of obfuscation, excuses and mantras as both sides talk past eachother, but nobody seems to want to step off and examine the timing, the intent, the means and most importantly, what it achieves. The result of doing so is to become an un-person. If you're a eurosceptic who attacks Ukip, a pro-Israel person who attacks the IDF and a libertarian who is skeptical of libertarian dogma you soon find yourself standing alone and talking to yourself.

I am told we come over as patronising and that our schtick is "nobody understands the world but us". Well, this criticism gets right up my nose, not least because it shows they haven't read either of our blogs in any great detail, but also because if there is one recurrent theme, especially lately on this blog is that we have little idea what is going on. We are clear to point out when we speculate, and we frequently point out where the gaps are in the media are - and where there are gaps in information which mean the certainties promoted by our commentatariat can be little more than speculation marketed as fact.

I'm not saying any of the things I say because I have a specific agenda, nor I am speaking in praise or detraction in my capacity as a blogger. I seek mainly understanding which will better inform decision making in future. What we find in media commentary is a lot of people who hold specialisms in politics but have a gaping ignorance of technical matters and those ever so tiresome details which most find to be too much hassle - when one can simply presume expertise.

My research on Libya has challenged just about every editorial slant I have seen thus far on all sides of the debate, and I have yet to conclude my work. This is inconvenient and disappointing to me because I now find myself on the wrong side of people I greatly respect. But I must go where dispassionate reading of the the facts leads me, having applied a particular kind of scrutiny that few others take the time to do. I have seen no other commentators even touch the angle I have taken on the Gaza offensive or the Libyan intervention. More to the point, I have listened to critics and addressed their points, and I have re-evaluated my own views on the basis of their indispensable inputs.

I make critical distinctions which are described as pedantry but I have gone to great lengths to explain why these distinctions matter, and the failure to inform the public of these distinctions is a failure of journalism altogether. We have arrogant and dishonest actors like Dan Hodges, idiots like Con Coughlin, the lazy and naive David Blair (with associated blowhards), along with many others who seek to paint a simplistic picture of complex and long standing conflicts - which are chaotic at best. We hold only some of the pieces of the puzzle, therefore those who cling to simple narratives and steadfastly refuse to acknowledge inconvenient and contradictory nuances are a disgrace to journalism.

You can look at the facts in many different ways and come to entirely opposing conclusions both of which are mutually credible, and to take one side without acknowledging the existence or the plausibility of the other is not investigation. It is dogma. And not worth my time.

Meanwhile, we shall continue to toil in obscurity educating ourselves and if anyone else wishes to be the beneficiary of that process and join in the debate then it is their gain and to their credit. And for those who don't, well I need say nothing.

As I alluded to earlier, the work on Libya and Brexit still goes on, and the lessons that arise from careful scrutiny of the details will better inform any analysis we do on current affairs as they break. Those who gloss over such findings and then waft into the debate as they so typically do, unarmed with a sense of fallibility, will be mercilessly ridiculed - and if you think you have seen us be "uncooperative" and "arrogant" thus far, you ain't seen nothing yet. If in the process I end up upsetting and offending most of my readers then I, like Richard North, could not give less of a damn.

We have a long standing reputation for pissing people off but we have an equally long standing reputation for unearthing critical information from places where few bother to look. That will continue until our typing fingers wither and seize. If it sounds like we think we know more than you do, it's probably because we do, or are certainly heading in that direction, and unlike the gaping arseholes who occupy the pages of prestige titles, we will admit when we are wrong - if so proven.
Posted by Pete North at 21:38