Ukraine: You put your left tank in... 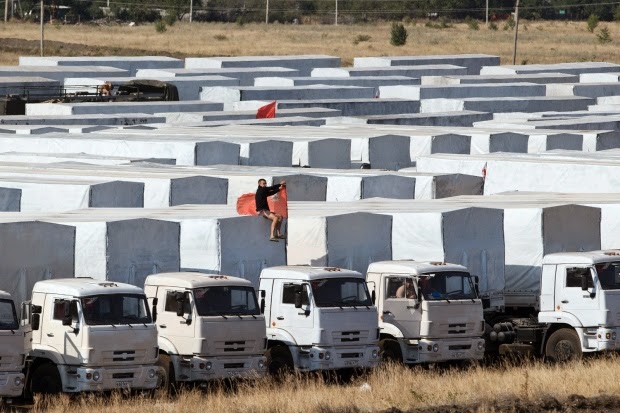 You put your left tank in, you pull your right tank out. You do the Hokey Cokey and you turn around. That's what it's all about.

As far as I can work out, Russia is trolling us. Putin is hoping we will up the ante to give him the domestic support he needs for more a aggressive stance against the West. This is a regime in decay. We see half a dozen light tanks crossing back and forth and probing with convoys to try and get a reaction from us. We must not rise to the bait. If he wants to play silly buggers then it's up to him. As far as territory goes, we're talking about a very small corner of Ukraine, and a fairly inconsequential one at that, and the Ukrainian army will eventually get its act together and clear out the separatists.

But in the mean time if we are careless, we run the risk of giving Putin exactly what he wants - which is why we need to be vigilant, but keep a our hands off, and not step up the war of words or the military exercises. It appears that this is what we have been doing thus far (to our credit), but this NATO summit this week might well result in a "something must be done" mission, which looks to be ill-advised at this time. The danger is small if we play it right, but it is we who have the capacity to turn this into a long lasting and ugly conflict if we make irrational choices to inconsequential provocations, which are misinterpreted by our media.

It is just as well this conflict is beyond the wit of our media, for it is they who would likely make a run of the mill border dispute into something much more ugly. For all our sakes, let's hope Iraq and Gaza continue to be the media decoy. Perhaps Israel could do us a favour by keeping that pointless little exchange running for a few more weeks.
Posted by Pete North at 11:46