Answer me this, Mr Gold 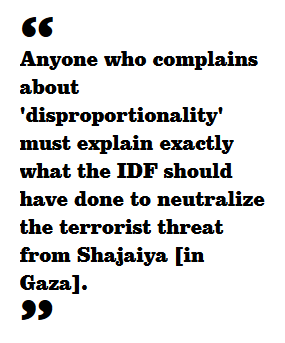 Dore Gold of the LA Times states that "anyone who complains about “disproportionality” must explain exactly what the IDF should have done to neutralize the terrorist threat from Shajaiya while causing less destruction than what occurred". Well, I have. Here, here, and here.

More to the point, this tunnel network is the Rue de Sacrée for the Hamas military offensive. It did not spring up overnight, and it did not happen without the knowledge of the Israeli defence ministry. If it did, then heads need to roll.

Destroying the tunnel network should be an ongoing security operation, and thwarting it is an intelligence and engineering challenge that cannot be addressed though conventional means for lasting effect. It must be a sustained effort. In any case, it is not a justification for firing artillery into residential areas when the technology exists to do otherwise.

One could get a little annoyed here in that far too many are prepared to trot out the same tired old excuses and mantras, each making the same old arguments for whichever team they have chosen to support. But few on the Israeli side have stopped even for a moment to ask whether this war is necessary, and whether it will accomplish anything of lasting value.

If Dore Gold wants to defend this clumsy and brutal operation, then he must explain exactly why a more scientific approach will not work, and just what the hell has the Israeli defence ministry being doing all these years, and why it has waited until now to do something about it.
Posted by Pete North at 09:46