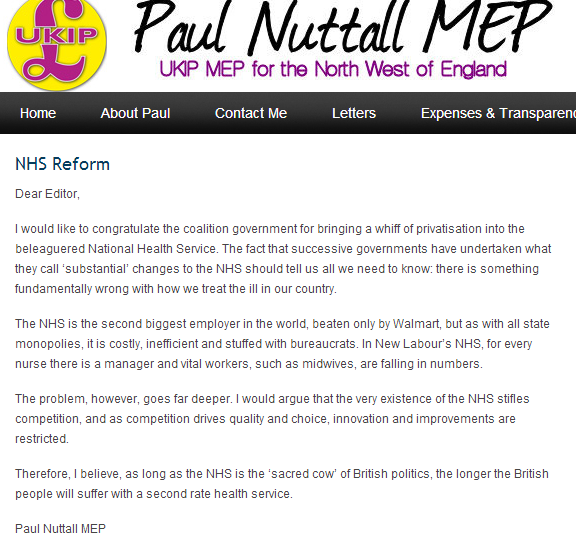 Readers of this blog know I'm not the biggest fan of Paul Nuttall as a politician. He has a thuggish demeanor and his yobbish conduct in public debate is not really befitting his position and he lacks the expertise to win an EU debate. But here above is his opinion on the matter of the NHS. It is not too far removed from my own. If you have a service that is both financed and provided by the state then it will only ever serve the interests of the state. That is what Nuttall thinks, that is what Farage thinks and that is what I think (and probably Carswell too). So why then does he and Farage tolerate Ukip's Health spokescreature, Louse Bores, who is to the left of a European dictator on this issue?

As I said almost a year ago, sacrificing sustained growth by selling out principles would only lead to division and conflict further down the line. As predicted, now the party is unable to get its story straight on the NHS, nobody believes what they say and Twitter is alight with individuals pointing this out.

The moral cowardice here is that more than a sizable constituency in Ukip, and the broader public, share his view and yet Ukip has done exactly what all the other parties have done and given way to cowardly populism - in the cynical belief that the public are too stupid to notice. That is the precise attitude that caused so many to leave Cameron's Tory-lite party and join Ukip. Now we discover Ukip is little different. A hollow party with readily dispensable principles.

I was vociferously attacked for pointing this out but now, when the NHS will be the deciding issue of the election, Ukip cannot reconcile its differences. Ukip needs cretins like Louise Bours to keep hold of the old Labour crowd, but sooner or later something will have to give. I was expecting a Ukip civil war would wait until after the election but it looks like it may happen sooner, not least with Tim Aker "stepping aside" as policy chief. There is more to that than they are letting on.

If you're following poll trends, at best you can say Ukip is stagnating, but ratings of 14% are becoming far too frequent and we've seen the odd 13% which I expect to become the new norm in due course. It's impossible to say for certain what shape a Ukip civil war will take, but if Ukip is to revive its soul, it must prepare for heavy losses.

Those who thought chasing the BNP/old Labour vote (ie all of the Ukipist loyalists) was a tactical master stroke must now reckon with their folly, because it looks more and more likely they will pay the price before the election. British voters are dumb, but you can't take them for idiots. It's true that most parties wait until later in the day to release a manifesto, but knowing Ukip's propensity for absurdity, and its vulnerability to media attacks, entering a general election campaign with little more than a shoddy collection of bullet-points and populist memes was foolish in the extreme.

There is plenty of blame to go around in the Ukip ranks, but all of this comes down to piss-poor strategy, short-term thinking, a shortsighted and arrogant attitude to policy, cronyism and outright corruption -  and whichever path you follow, they all end up at the door of one Nigel Farage. He has single handedly made Ukip a laughing stock, left it wide open to every attack and shows no sign of guilt or remorse. He is entirely self-serving and he doesn't care a jot what happens to Ukip. This was the man, we were told, could do no wrong.
Posted by Pete North at 14:46