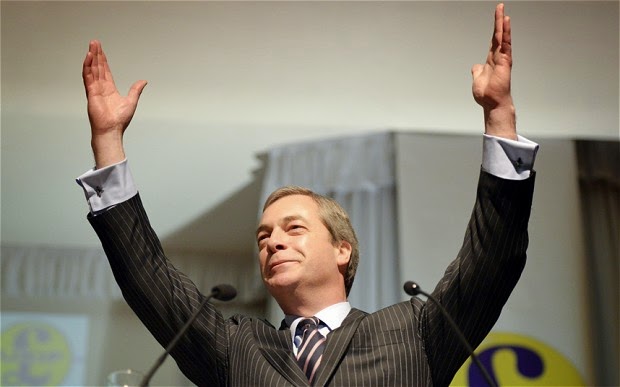 Alex Massie of the Spectator lists here all the familiar memes I remember from when the BNP were about. It could actually be that he has an even lower opinion of Ukip than I, if that is even possible. Farage's weak and fact free analysis is a shining example of of his crass and lazy approach to everything he does.

As it happens I disagree with Massie in that there are circumstantial and proximate causes for the Charlie Hebdo attack, and while I don't seek to be an apologist or in any way justify it, I don't absolutists lines are ever helpful when trying to diagnose a complex issue. That said, I don't expect either Alex Massie or Nigel Farage to be correct. One only expects that those who seek to pontificate on it do so out of genuine intellectual inquiry rather than political grandstanding, which is all Farage knows how to do. I know my provocatively titled analysis doesn't contain all the answers, but there are always nuances worth examining. Farage doesn't even get close. His understanding and vague recall of the dogma he spouts isn't even accurate according to his own school of thought.

None of that matters to Farage though. He doesn't need to be accurate or even correct. He only need open his mouth and his followers will listen, rinse and repeat. Those who disagree are labelled "traitors", "quislings", "Muslim apologists" and my all time favourite, "brainwashed LibLabCon muliculturalists". They have their narrative, they're not interested in educating themselves or even understanding events. They only wish to impose their narrative on others.

Were you inclined to play bullshit bingo you'd have a full house by the end of the first paragraph. Massie remarks that "For ages now Farage has been chuntering on about the need to protect our Judeo-Christian culture. He’s been at it again this week. That’s not a dog whistle, it’s a foghorn".

He has it exactly right. It's a mish-mash of sanitised and publicly endorsed academic narratives, all distorted into one meme. It's an intellectual figleaf the sniveling Ukipists can cower behind and pretend they're not racist. Because it's back en vogue it snowballs with lots of other bits of pseudo-academic theory tacked, on until they have an rhetorical shield of such rich sophistry, they cannot possibly perceive the inherent racism in it.

That's why racists never think they are racists, and when people believe this crap, they give themselves and each other permission to be even more bigoted. That's why you can't debate with them. There's not a single shred of self-awareness between them and not a single original thought. This has all been aired before and it sounds no more credible from the mouth of Farage than it did from Nick Griffin.

Almost from the very beginning of this blog I warned against Ukip becoming BNP-lite, but now there is no "lite" about it. Ukip is the BNP by anther name. One can only echo Alex Massie's conclusion that we can now dispense with the pretence UKIP has one or two "putrefying apples". "On the contrary, the tree itself is rotten".

I am told privately by Ukipists that Farage won't be around forever and it's just a waiting game until Carswell takes the reins. He himself has called for Ukip not to tolerate "pejorative comments about people’s heritage" and for the party to start showing it has a "serious internationalist agenda", and has also warned against Ukip becoming "angry nativists" -  the same as this blog has said for months - but that ship has already sailed.

By the time Carswell gets near the wheel cabin he will discover it's too late to change course. The damage is already done. He will have no mandate from Ukip supporters (or permission from the Faragistas he can't fire) to shape the party according to his politics, nor will he be able to rescue the party reputation. Carswell will just have to suffer his discomfort and reckon with his own foolishness as a lame duck leader. He will stand as the leader of a band of pathological losers, terrified of everything, with precisely zero hope of breaking the glass ceiling. One might be inclined to feel sorry for him were it not so damn funny.
Posted by Pete North at 14:17