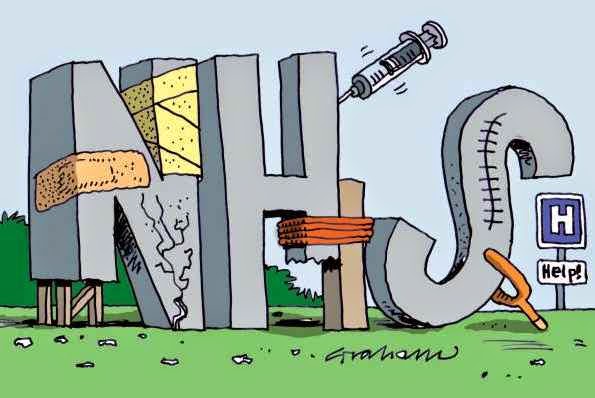 Here on this blog there's been something of an ongoing argument that Ukip could never hope to fight a campaign on a platform of NHS privatisation and would be damaging to try. Not a view I subscribe to. The public are entirely capable of having a grown up debate about it, and more to the point, Ukip's pretence that it is wholly committed to a ring-fenced NHS has created more problems for them than if they'd simply formulated a measured policy around what Ukip has always believed - that the NHS in its current form is unsustainable. And that is a winnable argument.

It's not so much that people are necessarily against private involvement in the NHS, but they certainly don't like to be taken for fools. An intelligent policy would have been less of a liability than a Ukip fudge. But again, this is something Ukip lacks any capacity for.

Looking at the recent NHS crisis, one is minded to ask, when isn't there one? There is always an acute shortage of beds, and curiously it always happens in the run up to an election. It exists in a perpetual state of crisis. Notably A&E.

The Daily Mash has it that accident and emergency waiting times have worsened because Britain is so full of cretins, and like all good satire, there's an element of truth in that. But there's another more basic question. Where else does one go? With adult social care and elderly care apparently decimated, and GP's not operating at evenings and weekends, what do they expect?

So for starters, the low hanging fruit is a renegotiation of massively overpaid GP's and why not have private practices in the front lobby of a large Tesco? If those with money have the choice of popping in to chat to a GP for a fee, if they so choose, then not only does that take the pressure off the NHS, it means everybody gets quicker access to services, and more conveniently so. And why not have Tesco run it? They have proven adept at getting food down to affordable levels even in the midst of what we are told is a major recession. In fact I would go as far as handing over the entire procurement and logistics operation to Tesco. The success of Tesco is eliminating overheads from their planning and logistics - and that is something they do better than anybody else.

Moreover, we have had private practice in optometry for as long as I can remember. Once it was liberalised, we had the likes of Specsavers pop up offering for the first time ever, competitive prices and better products. How I dreaded my NHS thick rimmed specs! Why can't there be high-street MRI scanners? Why spend a whole day waiting to be seen in a hospital by a technician, who won't even be the one analysing the results - when  you could pop in as though it were a branch of Jessops to get your holiday snaps printed?

There are many ways in which day to day procedures could be normalised and kicked out into the mainstream market that would allow hospitals to focus on more serious matters. You don't have to sell off the whole NHS estate to bring competition and the vitality of markets to the process, nor does it necessarily mean that those without money get worse services since those who prefer to spend their own money would free up resources. We could even go as far as giving individuals optional health vouchers they may redeem at a venue of their choosing.

As is often the case, the consumer is the best regulator - and any system where the state is financier, provider and inspectorate is only ever self-serving and hostile to any complaints (so evidenced by the Staffordshire scandal). But were the tables turned, no private hospital or private care operation wants to risk the wrath of Twitter. That means fiscal catastrophe for them.

I would then look at why adult care services had been so badly affected by cuts. That's very much a council competence, which hooks in with welfare. I think any analysis would show a top-heavy local authority system that is utterly crippled by its own bureaucratic inertia, which could be immeasurably improved by breaking up councils, cancelling certain statutory obligations and giving them the freedom to innovate rather than working to satisfy Whitehall statisticians.

These are all perfectly reasonable suggestions, all of which have real world examples which have been a tremendous success. So long as the approach is to favour that which works rather than a dogmatic pursuit of privatisation for its owe sake, then the arguments become winnable. But only if you have well crafted, holistic policy with competent people who can convincingly argue the case (ie not Louise Bours). To assume that everyone in the UK is militantly anti-privatisation overlooks the fact that no Labour party that reverted to socialism could ever hope to be elected.

There seems to be a disconnect in what people pay, what they expect and what they receive. It shouldn't be too difficult to persuade the people they are being conned and ripped off, because all of us know that we are. They're not afraid of privatisation, but they are afraid of Tory privatisation or the Labour quasi-privatisation mess that is PFI - which in itself was a cack-handed way of privatising the NHS without the consent of the people, bringing no discernible benefits and the worst of all worlds for the taxpayer. It is because of the mealy-mouthed, back-handed manoeuvrings that we have arrived at such an under-performing health service and no party has had the courage to grasp the nettle.

A confident, up front and honest approach would have won some respect. The fork tongued posturing by Ukip is why it is not trusted, and rightly so. It says one thing and thinks another. And this is the party that presumes to be the antidote to establishment politics?

But of course it's too late in the game now. The cat is out of the bag, there has been no policy research and right now Suzanne Evans is busy cobbling together what she can, frantically cutting and pasting from whichever Ukip manuscript she can find. And it wouldn't even matter if they did have their house in order because there is not one single ambassador in the party with the talent to get out there and sell it. They are all talentless and discredited Farage yes-men.

The bottom line is the NHS was conceived as part of a post-war settlement, forged from an idea nearly a century old. Lifestyles have changed, we are immeasurably wealthier, technology has advanced and the world we now live in is unrecognisable from 1946. We are all agreed that we must have universal healthcare available for the poorest at point of need, but we are a society that has thrived on consumer choice and market diversity - and that's what the NHS most desperately needs.

The only people who have a problem with this are the far left and that is the fight that must be comprehensively and unyieldingly won, because while they continue to own this issue, they will own every issue - and whatever hopes Ukip might have of leaving the EU will be thwarted by those same forces. The pubic will listen to reason, but they won't tolerate deception.
Posted by Pete North at 12:18