Farage: the man who failed at everything 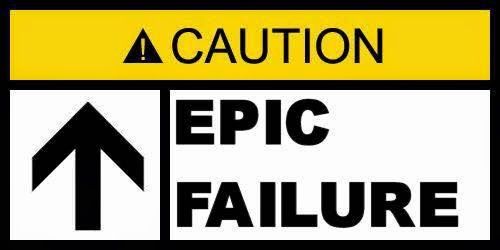 Newly appointed to the media claque as political oracle is one Dr Rob Ford (yet another anointed pundit), who postulates that Ukip lacks an obvious figure of Farage's authority to hold the party together after he goes. "How do you keep people like Douglas Carswell, [donor] Stuart Wheeler, [deputy leader] Paul Nuttall and [economics spokesman] Patrick O'Flynn all on the same page? None of them are necessarily people who much like taking direction anyway," he said.

The simple answer to that is you don't. Shithead and crook though Farage might be, he's just enough of a bully to keep his gang of losers in line. As Bongo Bloom remarks "There is a whole mafioso at Brooks Mews [Ukip's HQ in Mayfair, London] who are personally beholden to Nigel for their salary as are most Ukip MEPs" - and that's how he keeps a lid on it. Without that, it would be a squirming bag of competing egos that would have fallen out years ago.

Ford continues. "Everyone in the party recognises Farage's authority and defers to it. It's not clear yet whether there's a another figure who could do that. Without Farage we'd likely see an awful lot more arguments out in the open." A master of understatement is he, but Ford has misunderstood Farage in saying "The Ukip leader has been trying to build up his top team, so one day, they may have the profile to fill the void."

Yes, I fell off my chair too. That would imply some kind of leadership ability. If anything Farage has tried his level best to do the exact opposite, expunging anybody who could challenge him. It's no coincidence that his band of MEPs are intellectually subnormal twits. That's how Farage likes 'em. As HuffPo avers, he is not comfortable being reminded what a loser he is. It's not by accident that the party has no heavyweights to speak of. If there are any thinkers in Ukip, they are seriously well hidden.

But once Farage is out of the picture, Ukip really has nowhere to go. There is no intellectual capital or message to fall behind that a leader can pick up and carry forward, thus any selection of a leader will simply be a squabble among the minions who will flock to the politics of their preferred leader, rather than the (non-existent) agenda of the party. On the left, Lunchtime O'Flynn and on the right, Dougie Carswell. Both so at odds that any kind of consistency and unity will be impossible. The expression "bald men fighting over a comb" springs to mind. There will be little worth leading when the dust settles.

Popular narrative has it that the success and crowning achievement of Farage has been to put Ukip on the map and grow the party out of obscurity. But if the end result of that is a hollow party with no core, no soul and no message - and cannot withstand the departure of a leader without a bloody and public civil war, how then can that be defined as a successful leadership? Farage has built a personality cult, but not a movement united by principles and ideals. He has abused his position and wrecked the party.

According to the HuffPo, one senior figure complains: "Since Nigel decided it'd be more electorally successful if we zeroed in on one subject, which is immigration, and so far that has been proved correct. He has majored on immigration, which a number of the founding members are uncomfortable with it. "Nigel has dumbed the party down. The professional classes are leaving. Immigration has brought a different sort of member, a different sort of activist, if you look at Facebook, you see the effects of the dumbing down of the membership, the language, the spelling. All these things on social media are a sign of it."

And that's precisely what this blog said would happen - and has taken little pleasure in reporting it day in, day out. Again, how is that a success? The party is now a national laughing stock, it has stopped growing, and in light of the underlying signals in the polls; the high frequency, low end outliers, the minions smell blood and are already setting out their stalls to win the crown.

Here we have Lunchtime O'Flynn warning that the party is troubled by "out of countrol egos", as if we didn't know that - while he attempts to put clear blue water between himself and Dougie, and Carswell, not to be outdone makes his pitch in the Times, while remembering to cover his own posterior.

Carswell is eager to point out that he would back a coalition but not join one. This is because he has probably done the same math as I have, and assuming Reckless keeps his seat, the thicky twins will be the only Ukip MPs and thus effectively would be rejoining the party they defected from in a coalition, making them look bigger fools than they already do. It's actually pretty funny.

What's worse is Ukipists will hail Carswell as the great saviour for having a few scraps of ideas, which failed to pass while he was a Tory. As I think it was Julie Burchill who said Stephen Fry is a stupid persons idea of what an intelligent person sounds like, Carswell is a Ukipists idea of what a policy man sounds like. The whole Times article deserves a thoroughly good fisking, but needless to say the timid tinkering about the recall bill and open primaries is hardly radicalism, nor does it address the more fundamental dysfunction of our democracy.

Since the injection of Carswell's intellectual capital was likely the only potential source of thinking in that strand, the Ukip manifesto will be exactly what I said it would be: Empty, unambitious, incoherent and shallow.

The foolishness of Ukipists (and Rob Ford) is to mistake Ukip as a political party and expect it to do things than political parties nominally do. It has no party machine, it has no founding ideas and it doesn't really know what it wants. Better to read it like a playground gang than a political party. Believing it will act like a political party with internal and political cooperation is the mistake which prompts people to believe it has a future. It doesn't.

Charting Ukips demise on this blog is now merely a matter of journalistic obligation. The only goal that matters is to make sure Ukip is resolutely defeated so that euroscepticism can be reclaimed by a more credible organisation, so when the time comes we have grown ups making the case for leaving the EU, and not Farage's halfwit yes men.
Posted by Pete North at 12:39