The price of peace 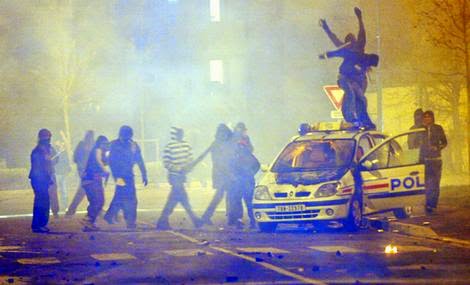 I watched some very disturbing footage of riots in Paris this evening. We have all seen it before on the television which we are all somewhat desensitised to, but eyewitness smart-phone footage in the thick of it really brings it home how terrifying it must be to be an innocent bystander. All the more harrowing knowing that this is happening just a few hundred miles from where I sit comfortably.

We see what I presume to be Algerian thugs breaking up street furniture and throwing projectiles at police while the police return fire with rubber bullets. It hits home how what we might call a civil disturbance can escalate into bloody wars.

We have had our own riots in recent times; the Croydon looting spree and the Bristol rots, neither of which were direct challenges to authority and were fairly moderate in intent and motive. One has a feeling that one could stand among the Bristol riots and simply watch in wry amusement without any imminent sense of danger, but riots have moods and what we see in France today looks pretty deadly. If I found myself among that I would find the fastest route to being somewhere else as quickly as possible.

In the Bristol riots, one gets the sense that our plod had bungled somewhere and the crowd reaction was simply the natural British aversion to an unnecessary display of authority but in Paris it looks like a direct challenge not just to the police but to the status quo. This is dangerous.

One might argue that our French cousins are always rioting and burning cars. It's not exactly unprecedented for Paris to be in flames and there has always been a certain revolutionary aspect to them, but from what I saw, something in France needs to change. And urgently.

What disturbs me most is that in any such disturbance here in the UK, where one simply doesn't have a dog in the fight, whose side does one take? It's one thing to deplore violence and to be an innocent bystander, but when riots turn into war, there are no innocent bystanders, only combatants and refugees. I think in any such scenario I would flee. I would not support the politics of the revolutionaries, not least because it would probably start with immigrant communities with whom I have no immediate affinity, but I wouldn't have any great sympathy for the police either. And so I would find myself in a war with no particular stake in the outcome. That is of course assuming that any civil war is fought between two sides. That is a singularly English assumption. Syria shows us that factions fight in what could be viewed as a series of play-offs.

If there is any point to this post it is, I suppose, that the peace we take for granted is a very fragile thing and as broken as we might think Britain might be, it's perhaps worth cherishing the peace we have than to give way to hate and violence.

That is not to say we should simply accept the managerial dictatorship we live under. Our ruling authorities do so under an implied threat of violence. We should be keen to remind them from time to time that they rule at our pleasure, not theirs, and that violence is not only an option, but a possibility - and that we outnumber them.

We have slowly become an occupied country whereby the state assumes that all property is their property that it allows us to have to license. It is a system that proportionately rewards conformity and severely punishes dissent. It is through a complex wall of bureaucracy that it secures our obedience but gradually salami slices our freedoms. Often so slowly that we don't notice. Our taxes creep upward but that which we can expect in return diminishes.

We are gradually being enslaved, not by the EU, not by Westminster or some shadowy international cabal. But by one another. We lose our freedoms every time we surrender to petty transgressions against us. It might start with a council tax bill or a parking ticket, but every time you surrender to the petty official, you tell the state what it can get away with. And like any spoiled child, it will continue to test where the boundaries are, keep probing and learning how it can further manipulate and exploit us.

My own patience is wearing thin. When I see council execs walking away with £420k payoffs I wonder if these people have calculated just how much they can take without us breaking ranks and storming the castle. I report on such instances every single week and few seem to notice or care, but are wrapped up in the bread and circuses of Westminster expenses. The decoy works. It looks to me like a cynical game, because they know where the limit is and stay just under it - while rubbing our noses in it.

When I have made a stand I have found myself easily nullified, isolated and humiliated by the state, because that's how they play the game. They pick us off one by one. The only way to stop them is to stand together as one and start saying no. But we Brits won't do that. We're comfortable, relatively secure, entertained and docile. Just how they want us. Thus I would conclude that if you really do want to keep that cherished peace, now is the time to start hissing like Colbert's goose.

This is your civic obligation, not to the state, but to one another. If we fail in that one duty the next riots we have will not be a whimsical stand-off between revellers and the police. It will be a deadly battle over the future, with the most violent deciding your fate.

I'm not so detached from reality that I'm not willing to entertain the notion this might all be the paranoid ranting of a spoiled middle class loser, but I've always lived by the words of Courtney. The price of peace is eternal vigilance.
Posted by Pete North at 20:45