There's nothing attractive about an angry mob 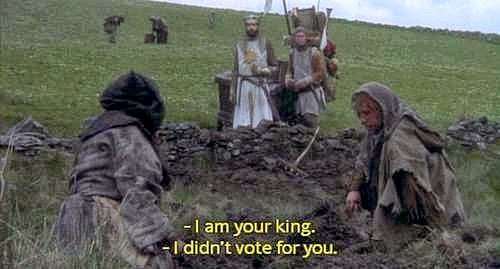 What the hell is this idiotic new trend of people complaining that they don't agree with *everything* in a party's manifesto? asks a Twitterer.

Admittedly, there is an aspect of of irrationality in peoples absolutist assessment of manifestos but what people are really looking for is whether a party has really satisfied their criteria - which is basically whether or not a party offers a solution.

There is a huge demand for change. There is a market for new ideas. But to cast even a glance at the Ukip shopping list, we see pretty much the usual tinkering one way or another, but nothing radical or revolutionary, or even controversial. Nothing brave and nothing principled - and definitely nothing coherent. After all the hype, and twenty years of effort, we look at what Ukip has to offer and think "Is this it? Is that all?"

Truth of it is, with a bit of persuasion and effort, we can get all of what Ukip offers one way or another from the existing established politics. But is any of it really the change we want?

I think all these upstart parties need to go back to the drawing board and work out what it is that really bothers them. I know what it is that bothers me. I'm even promoting our solution. But unless the likes of Ukip are prepared to do the same, they might as well be peasants sitting in the muck throwing balls of mud at the royal coach as it passes.

There's nothing attractive about an angry mob. There is nothing inspiring in it. All it offers is a shared identity for those with a sense of persecution. That's the only thing they can unite under. Passers by might listen to their objections and might even agree, but get a feint whiff of the loser from the mob - and walk by unpersuaded.

If you really want to capture people's imaginations, you're going to have to work out what's wrong, work up a solution - and then a plan to implement it. Then stop whining and get out there and sell it rather than pointing fingers. But the latter is pretty much all Ukip does. That is why it will fail.
Posted by Pete North at 09:45