Not terrorist related. Yet. 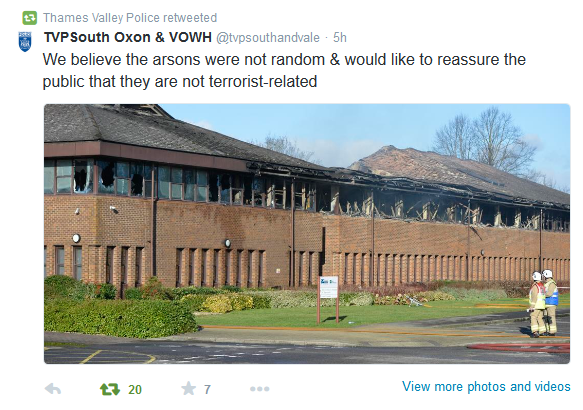 For those who missed it, South Oxfordshire Council HQ has been gutted by an arson attack. We are told by Thames Valley Police that this is not terrorist-related. Thus we can logically conclude that it is a subject one can speak freely about.

One of the reasons I presume to speak with authority on extremism is because I am an extremist. I have never denied it. I know what stimulates it, I know how the process mental works and I know how self-radicalisation can occur. Readers of this blog will know about my campaign against South Gloucestershire Council and some will recall that one of my less than subtle letters to the council landed me a day in the police cells and a telling off. In that letter I suggested that in the light of council ineptitude and corruption, we (in the democratic sense) ought to burn down the council offices. I don't fully recall if I added "with the occupants still inside".

A more careful individual would have used a more subtle turn of phrase, but I, and this blog, are not readily identified as subtle. But one lives and learns and I at least now exercise *some* editorial caution. My main defence is obscurity in that nobody actually reads this blog, but I'm ok with that.

Due to reporting restrictions, we are not yet permitted to know what the motive for this attack was. Some have speculated it relates to a planing application. Some might question the proportionality of this attack, but I don't. Anyone who has attempted to get a council to do their jobs and been met with the wall of obfuscation, hostility, defensiveness and denial will understand the impulse. It is only that prison is an effective deterrent for me that I have not given into one of my red mist moments.

Were this a terrorist attack, the law would prohibit me from glorifying this act and from encouraging more of it. In the interests of caution, since free speech does not exist in the UK, I will stop short of outright praising it and glorifying it, but only because the law says I must not. The fact that I can't ought to tell you something. But do I condemn it? No not at all.

The crucial point for me here is that councils are becoming increasingly remote, automated and unresponsive, where councillors have very little power over them, and the courts serve only as a rubber stamping mechanism for whatever offence council asserts, with no appeal unless you can afford it. This is not democracy, this is not public service and it certainly isn't justice. More galling is that we are forced to pay for it with only fig-leaf representation.

Rather than being servants of the public, councils are the agencies of central government by which the establishment secures our obedience and salami slices one freedom at a time. From hidden motorway speed cameras through to snatching children through a process of secret courts. Day to day misdemeanours by petty criminals is tolerated but disobedience of these regional authorities is not - Often to the point where the poor are summoned to court in their thousands in each authority and subjected to charges that would make Wonga blush. The leading cause of debt enquiries to CAB is council tax and their private bailiffs who are not in any way accountable. Moreover, this happens without any democratic accountability. That in itself, one might conclude, is good enough reason for arson.

The thing about liberty is that it's never snatched all at once. It is salami sliced at an unnoticeable rate and if we want to retain our liberty, now is the time to start hissing like Colbert's goose. Since authorities clearly aren't listening to the signals we will see more of this. We have already seen an arson attack at North Avon Magistrates, and boobytraps set for police cars (and that's just in Bristol). We're even seeing more violent attacks on traffic wardens and police. And it's all completely understandable.

I actually feel encouraged that people are starting to bite back. The latest intrusion means that soon every car journey on the motorway will be restricted to 70mph when the vast majority of people routinely break the speed limit because the roads are safe and cars are safe too. But now, because of petty authoritarianism, zealotry and a greed for revenue, the joy will now be sucked from driving, driving will be more hazardous and journeys made longer. This should be met with open defiance. But it won't be because the state will disproportionately punish us for doing so. So on the face of it, it's starting to look arson now or bombs later - otherwise we sleepwalk into tyranny.
Posted by Pete North at 13:36