We need to have a little talk about Ukip 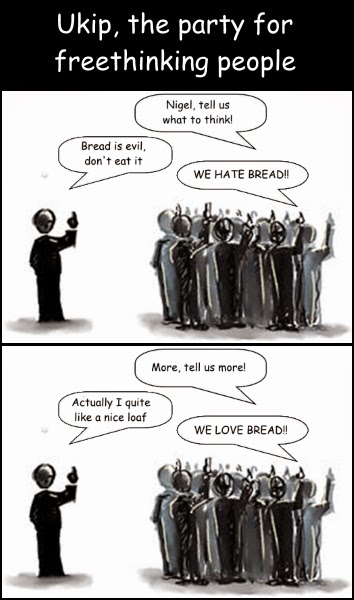 We all know what a bunch of bandwagon jumping hypocrites our politicians are. The sight of Ed Miliband in a "This is what a feminist looks like" t-shit is enough to make most people want to vomit. We're all sick of the cynical manipulation and we're all jaded by this cringeworthy circus of morons caught up in the media feedback loop. You folks in Ukip are right to want to stick twos up to them, and I don't blame you either, but seriously, have you looked at the company you're keeping lately?

This week has seen Farage weeping crocodile tears at the Tower of London and Mark Reckless exalting the virtues of Gaddafi's grotesquely brutal transit camps. Meanwhile there isn't a single bandwagon Farage won't jump on. He's even in the Independent cheering on Russell Brand and the Occupy tossers. Then we have the cyber-kippers bleating about "muzzer pedo gangs" - and Ukip today also has the temerity to poke holes in the UCL immigration study, questioning the numbers, when your own billboards and literature imply that tens of millions are coming to the UK to take my job.

Then look at your policies. They're all over the shop. You're promising the moon on a stick to anyone who will listen. On the one hand, you're keeping up a credulous veneer of libertarianism, but to listen to Lousie Bours on Youtube, you'd think you were at an SWP rally. UKIP's policy programme appears to be defined by pointing at things and saying "not that", but offering virtually nothing by way of alternatives - and those things you do suggest are so wildly incompatible with reality it's not even funny.

Meanwhile, the more you play these populist games, the more the cracks begin to show, whereby you have zero chance of capturing the middle class moderate vote we need to win a referendum. The swing vote is fickle and the boorish behavior of Ukipists is a big turn off. It's why the Scottish nationalists lost the independence referendum. That, and of course the lack of a credible alternative vision. Ukip doesn't even have an EU exit plan, and it has produced precisely zero evidence that a Australian style points system for immigration would work in the context of Britain.

What's worse is that you accuse me of being a europhile for daring to question the great leader when I'm trying to get you morons to listen to some sense. I have said this a billion times before and I will say it again: This incoherent scattergun approach with no message discipline can only fool some of the people some of the time. And the more you do it, the less attractive you become. You are blowing the chances of leaving the EU.

If we get a referendum, we will need a careful and considered exit plan with good answers that reassure the swing vote, they who will be hesitant to gamble our fragile economic growth, and Ukip's fag packet on-the-spot baloney isn't going to cut it among opinion formers.

Why sure, you want to get rid of the establishment parties (and so do I), but take a long, hard look at the party you want to replace them with. If you do any serious analysis on social media output, you will notice that the EU is barely the central issue. Your party has made the whole debate about immigration with the EU being a side issue. Ukip has walked into every trap set for it, and because of the quasi-racist narrative and nationalist imagery, it's difficult to escape ordinary people's perceptions that Ukip is a sanitised BNP. There is not a chance in hell a party like that is going to win power, and only a marginal chance that we can win a Brexit referendum if thugs and narcissists like Nuttall and Farage are the spokesmen for the cause.

It's all good fun sticking it to the man, but you people have to decide where your priorities lie. Without a real agenda for change you're simply taking power because you can. Can you honestly tell me that we will be a more prosperous nation for electing the kind of crass, boorish, anti-intellectual, reactionary morons Farage surrounds himself with?

I know I can't change the minds of the party faithful. There is no talking to them. But I know there are some good and conscientious, intelligent people in Ukip, and I am appealing to them to think pretty hard as to whether this is really what you signed up for?

Yes, Ukip winds up all the right people. The smug, self-satisfied Beeboids hate Ukip and so do the far left, but when moderate people are starting to say the same things, don't you think it's time to listen? You've had your fun, but there's a referendum on the table, it's the only one on offer, and if it's all the same with you, I'd quite like to win it.
Posted by Pete North at 12:07