The woes of Ms Monroe 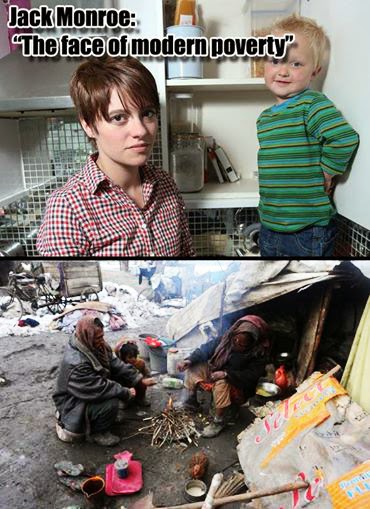 Readers will probably be aware that I'm not a fan of Little Miss Self-entitled, Jack Monroe. In fact, the very first post on this blog was a prediction of sorts that turned out to be quite near the mark.

But it seems she's landed herself in a spot of bother and has been thrown under the bus by Sainsbury's for her remarks on Twitter. She said David Cameron should resign for using his ‘dead son’ as a front to privatise the NHS. Or words to that effect.

Andrew Percy, a Tory member of the Commons health select committee, said: ‘This is not just a distasteful tweet, it is sick.‘If a Right-Wing politician or columnist had made such a comment, Miss Monroe would be writing hand-wringing columns about how evil or cruel such a comment was.’

Charlotte Leslie, Tory member of the health select committee, added: ‘Anyone of any integrity is left pretty speechless. 'Not only is this incredibly callous and hurtful from someone who is supposed to be in a position of some responsibility, it is also utterly inaccurate.

Andrew Percy rightly points out the hypocrisy of the left in general, but it should also be noted Ms Monroe is no stranger to using her, very much alive, son as a stage prop. And Charlotte Leslie is quite right too. Those who enjoy a privileged position in the public eye do have a certain responsibility.

Many people on the right have refused to jump on the outrage bus because we live in a time of "trial by Twitter" whereby good people have been brought down for saying much less, and to jump on the bus in this instance would be to perpetuate that current trend. I am not one of those principled individuals, because I'm more than happy to use the outrage bus as a means of dispensing with people who need to get got.

I was not in anyway sad to see Chris Huhne sent to Coventry, nor did I lose any sleep over the sacking of oaf, Godfrey Bloom, and, if I wasn't already having an awesome day today, the news of Monroe being thrown under the bus would be a cause of some celebration.

The simple fact is that there's rules to this here game. Rule number one is "don't say stupid things on Twitter that will wreck your career". It's a simple enough rule and there are plenty of reminders as to why you should not break it. Thinking before one speaks in the public domain is generally considered good practice.

While you or I might be able to get away with saying such crass and stupid things, those in the public eye do not have that luxury. If you wade into a swamp, you will get covered in leeches. This does mean I don't get to complain when one on my side is shot down, but this is just how the game is played now, and there will be casualties of war. That much is not going to change.

Some might argue that there is a higher principle of freedom of speech at stake here. I don't think that's true. You have a right to an opinion but you don't have a right to an egregiously stupid one without relentless mockery, and companies like Sainsbury's are perfectly well within their rights to distance themselves from such stupidity. And why wouldn't they?

Monroe is a ghastly creature, a sanctimonious hypocrite, a liar and a manipulative, calculating, nasty piece of work. She has enjoyed far too much privilege for far too long and it is long past the time karma caught up with her. There is a certain wisdom in a Twitter mob and if you live by the sword then you WILL die by the sword. The only pity is that the sword is a figure of speech.
Posted by Pete North at 18:11