Losing the plot on foreign aid 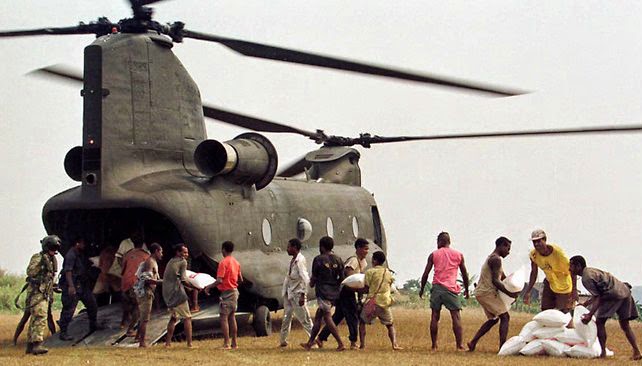 Ok. Here's the deal. Before we can decide how much foreign aid to give we must first remind ourselves what foreign aid is for. It is not a charitable donation to make ourselves feel good. It is a foreign policy tool that must be used toward specific objectives. Therefore, there should be neither a maximum or minimum budget for it.

In some instances, developing third world (West African economies) is in our national interests because it stems the flow of immigration. That kind of proactive investment costs less than putting up barriers and making immigration more bureaucratic.

We can also use it as a bartering chip to persuade Turkey to grant asylum to more Syrian refugees. Or we can use it to help build effective immigration administration systems and border patrols for North Africa. Targeted aid does serve a function. To set an arbitrary spending threshold makes no more sense in this instance than it does to set an arbitrary "must spend" threshold on golf balls or socks.

The notion that it should go toward a decarbonisation agenda means that money which could otherwise be directed toward foreign policy goals in the direct national interest is instead directed at baloney vanity projects, which serve neither us nor the developing world - and will likely be spent by supranational authorities who have nobody's interests at heart but their own. It is precisely this kind of boneheaded vanity politics that gives foreign aid a bad name and it's why we get little-englander Ukipists calling for foreign aid to be stopped.

Foreign aid is much like military procurement. You can't decide what kit to buy until you have defined the enemy. Similarly, we cannot define how much foreign aid to spend until we have adequately defined our foreign policy. (answers on a postcard)

Foreign aid is the art of buying political favours. If done cleverly, it works well. The Romans called it 'subsidies' and we did it quite effectively in buying peace and assistance with the Iroquois against the French in the New World. The problem is the lack of honesty about it, and dressing it up as something altruistic.

Presently our foreign policy is defined by our allegiance to the NGOcracy, a soft-left wing populism - which serves neither the national interest or any strategic foreign policy goal. It is wristband politics, and "decarbonisation" is essentially Western cultural imperialism to stop the third world industrialising; another form of rampant protectionism dressed up as care for the environment. Meanwhile the issue of real pollution, where most nations are poisoning rivers and lakes into oblivion, goes ignored - in favour of the fictional threat of CO2.
Posted by Pete North at 16:08