Rochester: no room for complacency 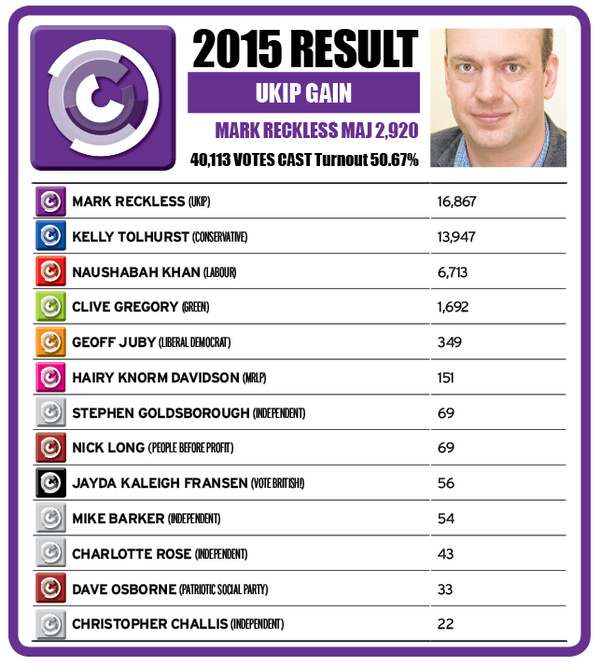 One thing I didn't say but should have is that Reckless's majority will not be a large one. But that was predictable. This leaves the game wide open for Rochester in May and it is not by any means guaranteed he will keep his seat.

What we see here is a very sharply focused vote with Ukip having galvanised all of the protest votes with only the Greens making a respectable job among the minnows. I'm not sure what it tells us for a general election and reading the runes on the basis of a high turnout by-election is probably not very sensible anyway. But this result doesn't prove very much for Ukip. Politics is littered with defectors keeping their seats. The test is in whether Ukip can defeat a sitting MP with a challenger. This we have not yet seen and we are not looking at a good sample here.

The result is in keeping with the Euro elections in that Ukip can now take all of the protest vote to the bank and any MP in a marginal seat is likely to lose to their next biggest opponent. I expect an analysis by constituency on that basis will be the best indicator of who is going to win.

This blog has long made the case that peak-Ukip is an inevitability. Mark Pritchard MP thinks it is almost upon us. I have a hunch he's right. There is room for a few surprises and Ukip can still do some damage but this result will bring minds into focus. The smears don't work, but careful and forensic analysis of what Ukip says, and what it does, will unearth the vulnerability everyone has been in search of.

Left Foot Forward has finally noticed that Ukip has little in the way of substance and is trying to be all things to all people. The penny finally dropped for The Telegraph yesterday when they noted Ukip's lack of policy can and will hurt them. And what will hurt them more is their amateurish and stupid policies when they do finally release some. Meanwhile, the lack of message discipline will see more unforced errors from Ukip. All of which was predictable and predicted on this blog long ago.

Ukipists, of course, have had their heads buried in the sand and only the immediate poll results speak to their minds. When the bubble bursts the only people who will be surprised are Ukipists. And that is a matter of when, not if. There's a way to go yet, but if there is a fatal mistake to make, Ukip will make it. That you can bet the farm on.
Posted by Pete North at 00:38