Suzanne Evans is UKIP Deputy Chairman, and one of Ukip's least dreadful people (which is not saying much). Here above she argues Lichtenstein manages to maintain trade as a member of EFTA. So she infers that EFTA is a necessary enabler for trade with the EU - otherwise she wouldn't have brought it up. But if we look at her own party website... 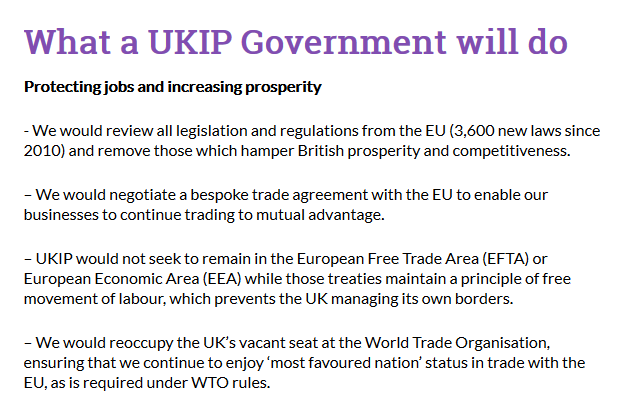 "UKIP would not seek to remain in the European Free Trade Area (EFTA) or European Economic Area (EEA)".

Most amusingly, we are not members of EFTA, but we'll let them off. We know what they mean. They mean leaving the single market completely. Fine, you might say, but there is no indication from them as how they think this might be achieved. You would think they might have a policy on it since their party was set up to leave the EU. Perhaps I'm just being pedantic?

But in typical Ukipist fashion, it's not about what they are for, but what they are against, and coincidentally, Ukip Daily has run a piece absolutely ruling out what we now call The Norway Option, and curiously are pedaling the same myths as sworn Europhiles:


Amongst those who want the UK to leave the EU there are those who say “Look at Norway, we can have the same arrangement with the EU as they do, a simple free trading agreement”. This is profoundly wrong. The European Economic Area (EEA) countries of which Norway is one have to take on most of the more obnoxious burdens of the EU whilst being excluded from EU decision making.

This is, to put it politely, pig ignorant. The majority of EU law is not made by the EU. It is made at an international level, along with trade rules by ASA, Basel2, UNECE, Codex Alimentarius, WTO, NAFO and whole host of bodies nobody in Ukip has ever heard of, where the EU takes our seat and negotiates on our behalf. Norway has more say than we do at an international level - and it's Brussels sitting by the fax waiting to be told what the law is. Moreover, Anne Beathe Tvinnereim, a Norwegian minister, quite flatly denies Norway has no EU level influence.


The EEA states have no formal position within EU institutions such as the Council of Ministers, the EU Commission or the European Parliament. Hence, EU decisions are made without their official involvement.

It is true that the EEA has no formal position within the EU. In a manner of speaking, it's the other way around, but the notion Norway has no say is a complete fiction.

So here we are with Suzanne Evans, a senior person within the anti-EU party, recognising the necessity for EFTA (which her party does not advocate), and has yet to specify how we decouple ourselves from decades of regulatory integration. On top of that we have the primary propaganda rag for Ukip making europhile arguments. Does this not strike you as a little odd?

And there's the inherent problem of running a party with no policy and no message discipline. You can expect to hear every exit solution uttered at some point by a Ukip MEP, including the ones they have categorically ruled out. A little worrying wouldn't you say? You would think they might have acquired some expertise on the matter and written a policy by now, what with being MEPs and all.

But this is Ukip we're talking about. Ukip is a party pushing us toward an EU referendum, and will be representing the exit camp, and have no idea what a post EU Britain is going to look like. And that's fine with them.

There is of course a realistic and practical exit plan in existence, but Ukip cannot endorse it because it has convinced itself that the EEA is primarily the source of problem immigration (it isn't), and that we have no means of controlling it. This is the profound ignorance of Ukip, and this is a party who thinks they can wing it through a referendum campaign, expect to be taken seriously and (alarmingly) don't expect any serious scrutiny.

They have, as expected, stopped reading eureferendum.com because we're mean about Ukipists, but if any in the media have the initiative to read it (and they do), they'll be far better informed than Ukip, and so when pushed for serious answers they'll be left hanging in the wind - and looking like fools. They'll be in serious trouble if they're pitted in a live debate against a europhile who knows what they're talking about.

Ukip thinks it doesn't need to know anything about the EU to convince the public to leave. That's not a gamble I would take in their shoes, but they know better apparently.
Posted by Pete North at 07:45