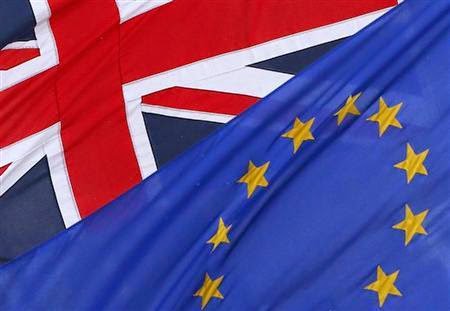 The main reason I blog on Ukip incompetence is so that EUreferendum.com doesn't have to. But here's why it's an important function. Ukip have drifted away from euroscepticism, having gone in for immigration as their big issue, so much so that a third of their number don't actually want to leave the EU. That has left euroscepticism without a frontrunner organisation and it falls to us to do the heavy lifting.

We have been saying for a long time that we will need good answers to tough questions and to be able to thoroughly bury the myths surrounding Brexit. There needs to be an effective force educating the public about how corporates are framing the debate and how they will employ scaremongering and deception to keep us in the EU. Ukip isn't it.

In order to counter the myths you'd have to have a thorough command of the issues and a detailed policy on how we would leave the EU. Ukip doesn't have one. We have to keep reminding people, including Ukipists, that the EU is not the single market, and the only way we are going to win a referendum is to reassure the public that one way or another we will still have access to it. That blows the scaremongering out of the water.

But Ukip hasn't gamed this referendum at all. It has no particular policy on it. Their policy page states only what they won't do - which specifically rules out any single market mechanism. That would be excusable if it had presented a realistic alternative, but there is no expertise within that party thus are unlikely to do so. You might think that a party hell bent on getting us out of the EU would hold such expertise, but that actually tells you everything you need to know about them and their inept leader.

Ukip has given up on their main objective and has drifted to immigration as an issue where again it has demonstrated no serious policy competence, no serious alternative and no aptitude for policy making. A while ago I might have thought this a bad thing. But it isn't.

If Ukip are drifting away from euroscepticism, it would actually be better for everyone if they went the whole hog and ditched Brexit as a campaign point so that euroscepticism is not in any way associated with that sad little clan. That way the referendum debate can be lead by competent adults rather than cavalier show-boating cretins like L.Ron Farage.

We had hoped that Ukip would be receptive to our message. But they're not. We tried being diplomatic, we tried being polite, and it didn't work. Ukip are wilfully deaf. So now all that's left is relentless ridicule - because that's what it deserves. We very much wanted to see Ukip up their game, but it's clear to us that can't happen now they are so far down the populist vote grubbing path. The party would have to shed its red wing, do a massive u-turn on it's ultra anti-immigration message and start engaging in the debate. It's too much to ask of them.

With Farage still at the helm and still appointing incompetent yes-men, still not learning the lessons, and paving the way for the next big blunder (while backtracking on the last), it simply isn't going to happen. Ukip will never focus, never professionalise and never up it's game. It just doesn't know how. So the more distance Ukip puts between it and the Brexit campaign, the better our chances of winning a referendum. We just don't need allies like that. It's better it continues to be a laughable curiosity on the edge of politics than to allow it to make the case for us - and get it spectacularly wrong.
Posted by Pete North at 03:47