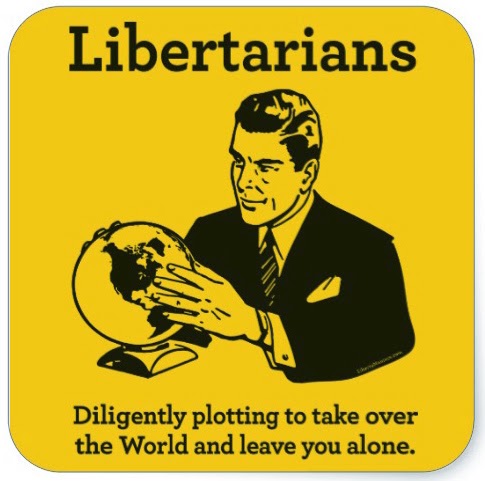 Libertarianism is a big tent. There are minarchists who believe in the concept of a night watchman state (and no that's not as sinister as it sounds) and then there are those more concerned with civic and civil liberties, but do not extend as far as low taxes.

But there is also another school of thought in that good government is invisible government, which can be as big as it likes so long as it facilitates the creation of wealth and stays out of the way.

One of the great liberties in this country is the supremacy of the pedestrian in the street. My own encounter with a yellow cab in New York was a sharp reminder of this particular cultural difference. Say what you like about the officiousness of this country and it's adherence to petty rules, it is precisely those rules that have created the safest roads and the best driving standards anywhere in the world.

It's also a matter of standard road camber and regulation for signage universality. That didn't happen by accident. So much of what you see around you but don't acknowledge is regulated, and it's these little bits of invisible government that facilitate trade, greater freedoms and a safer existence.

The art of politics is the mechanism to mediate the line between nanny state and individual liberty. Sometimes it goes too far and that's why we have rudimentary mechanisms that are not democracy but based loosely upon the concept.

While libertarians are quick to scoff at the notion of a social contract, there is a tacit contract in that we accept a normative level of personal infringements for the common good. The law that says I can't keep my neighbours up til 4am with 90's acid techno is an infringement I accept with the expectation that I also have the right to a good nights sleep.

Granted, this example is reductio ad absurdum, but it goes to show that we each accept a degree of regulation. What lies between is politics. And this is why vigilance and participation is a necessary function of civics to ensure that good governance remains invisible and unintrusive.

The dogmatic notion that deregulation necessarily creates more wealth fails to acknowledge the complexity of the modern world and the fact that so much regulation is not only desirable but also essential. You might think it is in the manufacturers own interests to build a car that didn't kill the driver or for airline builders to build aircraft that fall out of the sky, but it is only through mechanisms of the state such as the air crash investigation bureau that findings have been transposed into global regulation, which means that when we do occasionally see a passenger liner fall out of the sky, we find it shocking because we have come to see it as unthinkable as well as inexcusable. Left to their own devices, they would still be killing us and getting away with it.

Of course to the dogmatists, this makes me a raging authoritarian. But like all dogmatists, because their ideology is a well mapped out schema of assumptions and absolutes, it means they never have to compromise or think beyond lazy assumptions, or mucky themselves with technicalities or the inherent contradictions of modernity. It is for the same reason the socialist cries "underfunding" each time there is an NHS scandal. It is the simple, easy and lazy answer. It is no more respectable than the libertarian who cries "red tape" for the failure of their business.

Liberty is a subjective term and there are many permutations. I wholly embrace the ideal of liberty, but the notion that in a world of internet, aviation, genetically modified foods and global banking, we can simply dispense with internationalism and global regulation and all will be well, is not just optimistic, it's childish.
Posted by Pete North at 09:46