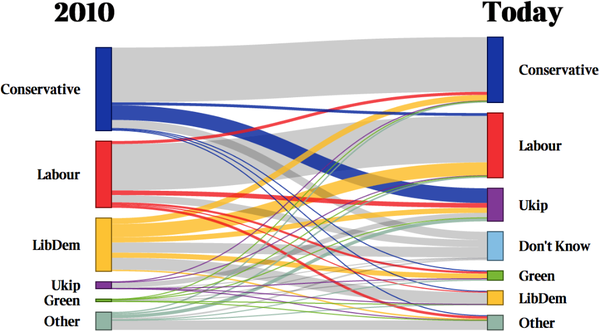 We've crunched the numbers, we've looked at the demographics, we have examined the issues and we don't see much of future for Ukip. Surge politics have two inevitable outcomes. Either they become successful enough to be absorbed into the existing political landscape or they fold and gradually disappear.

You can see from the graphic above that Ukip is still predominantly a conservative outfit but is now drawing half of its support from a number of disparate factions. Such alliances are fragile and when you have sacrificed sustainable growth for ready publicity without a solid definition it wont take much for the vote to fragment and collapse (as happened with the Lib Dems).

In a five party split for the next general election the polls are not a great indicator for which way the election will go. All it can do is measure overall sentiment which does not account for the vagaries of local boundaries, local politics and the minnow effect (vote splitting). All we can say for certain is that nobody will be a clear winner.

If it's a Labour government, there's no EU referendum and the fight goes on. We will then likely see more defections to Ukip and a Conservative civil war. It is impossible to predict the outcome of that so it's senseless to even try. It may be that it comes back as a more robust Conservative party with a eurosceptic leader or an even more centrist party. We do not know.

We will see Ukip established as a small Ukip parliamentary party who could possibly force a referendum, but that is by no means guaranteed. Ukip has made plenty of unforced errors thus far and more exposure with their MPs in the public eye could actually hurt them.

It could be that the Conservatives win in which case there will be a referendum. Given how a newly motivated Ukip is more confident in displaying its ugly side, their overall popularity will decline even if their vote share goes up (they are independent variables). Consequently a referendum win is by no means a dead cert. So the actual likelihood of the UK leaving the EU before 2018 are small.

The only other certainty is that despite their enthusiasm and capacity for self delusion, Ukip is not going to break its own glass ceiling, it is not going to be a party of government and it is highly unlikely it will take enough parliamentary seats at this or the next general election to form a coalition with any minority government. So if you were hoping for a revolution in governance or a new dawn in a brave post-EU world you might as well put your feet up. It's not going to happen any time soon.

Already the cracks are showing. Ukip's lack of written policy is leading to gaffe after gaffe and the Teflon coating is wearing thin. Worse still, the only thing worse than a Ukip with no policies is a Ukip with defined policies. It's a dead-cert they will be so insufferably weak and inconsistent that the media will have a field day with them. The Guardian noticed last week with Ukips's health "policy" and today the Telegraph has noticed. There is nothing to be done For Ukip.

We are of the view that there is no shortcut to reform. Any movement for change is going to have to be based on a new vision and a big idea. The task will be to convince the people to demand that vision and force the establishment to concede to our demands. It will not be achieved with party politics and it can't succeed on a negative premise. Ukip has been a twenty year lesson on how not to do it.

Even in the remote scenario that we leave the EU soon, the day after that referendum will be day one on a long march to democracy. It would be nice to have one obstacle out of the way, but really we should expect that we will have that referendum soon, Ukip will ensure we lose it, and the eurosceptic movement will be buried. Now is the time to decide what shape the movement to replace it will take. We think the Harrogate Agenda is the best vehicle for true democracy. It's as good a place as any to start.
Posted by Pete North at 06:08