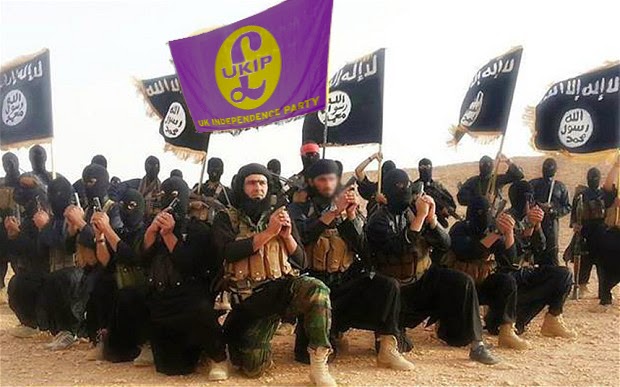 British politics is the art of finding what swing voters want, appropriating the means and giving it to them. It shouldn't be that way, but that's what it has become. It means that patrties have surrendered their principles and instead steal eachothers clothes, turning on a sixpence every other week. That is the politics that people are sick of. That is what we know as establishment politics.

It's not that we send bad people to the Commons. I don't think anybody entered politics with the ambition of making things worse. It's true, it takes a certain type of person to navigate the obstacles, and the inherent culture produces a certain set of behaviours where after a while they go native. It certainly doesn't help that parties cynically parachute their people into constituencies to ensure their friends and allies occupy public office. From this we get career politicians. All of this helps to create a toxic brew of favours and back-scratching which has predictable results.

It's obvious that it's less to do with the people as it is the ground rules. When people say the system is broken they're right. There is a system. It is broken. A bit of tinkering here and there does not address the systemic problems and changing the guard does not fix the system.

The principle appeal of Ukip is that none of the people in Ukip are any of the people of that system (save for Douglas Carswell). But that's not enough. The problem being that however well intentioned, the system will win. It will take these Ukipists and it will swallow them whole. It is already showing signs of doing so. They will parachute in their men to get the power, they will say anything to anyone who will listen, playing establishment games by establishment rules with promises and policies all over the shop.

We all change our views now and then. There's something unhealthy about those who don't. I've gradually shifted from the extremes of libertarianism over the years to a more pragmatic approach, and yes I've had to make compromises, because in a democracy you don't get it all your own way. But nobody goes from free market warrior to waving the red flag, and if they do, it isn't inside a year. But that seemingly is what has happened to Ukip.

I would like to know from Ukipsts how they manage to reconcile this. I'm told there is a game to be played and they must play it to take power, but if by the end of that you've become what you sought to destroy, what is the point?

If we want a revolution in how things get done we will need revolutionary ideas. Ukip's "policies" are not informed by principle, nor are they the result of systems analysis. They see the UK as a Christmas tree that would look prettier if only they were allowed to decorate it. They have a box full of policy baubles and tinsel but are blind to the fact the tree is dying and shedding needles all over the carpet. So when people tell me they are worth a punt, I just cannot see it.

I'm not saying that Ukip should conform to some kind of ideological purity. I would just like to see policies that were informed by a diagnosis which was the result of system analysis. I wouldn't even mind if all their policies were wrong on the basis of a misdiagnosis because that would at least imply they have set about policy making in a methodical way. That would at least demonstrate *some* self-awareness.

Instead it has become all about immigration. It has defined itself based on what it doesn't want and what it isn't, but has not set out a stall of what it really is. It has assumed the role of the white knight riding to town to clear out the evil and corrupt kings, and this narrative is suckering in a lot of people who buy it without question, but for most it's just about getting rid of the incumbents. They wish to quit the EU without any regard to the consequences, without a compass, and burning the quangos and ministries to the ground. This is the nihilism of Ukip. A party bent of on a wrecking spree but has no vision, no designs, no principles, no philosophy. It's a juggernaut out of control with a driver asleep at the wheel.

This of course cannot be explained to a Ukipist. It falls on deaf ears. They will Tweet their "policies for people" at you and that for them is sufficient. You won't get any luck by going up the chain either. With a name like North, they will shoot the messenger without hearing the message. They have briefed their activists and so instead of addressing the substantive points they go into attack mode. I and others keep saying it but it doesn't matter who says it. Their friends and enemies alike are saying the same things but they will follow Captain Kamikaze into the fire, because really it's more a support group that gives them a comfort blanket for their disaffection.

The other point lost on them is that their playing to the gallery ensures defeat at a referendum, and while they cannot see how their cynical games have a corrosive effect, the rest of the voters will. Attacking europhiles doesn't work. Persuading them with a vision might. But you can understand why they wouldn't listen. The smears don't work, the attacks don't work and the establishment parties are really in no position attack them on policy inconsistency and lack of vision. The juggernaut has armour plating and the shells just bounce off.

This only emboldens them and it is their self confidence that galvanises support. It creates a feedback loop and the polls tell them what they want to hear. It's easy to see how the Nazis became such an unstoppable force of history. It's less about the direction of travel than it is about following a leader. People still want leaders and and the charisma of Captain Kamikaze has a great deal more appeal than the Cleggerons or the dead carp presently at the helm of Labour.

So what we're seeing here is not a principled movement nurtured on a manifesto for change. We are seeing a tribal surge which in many respects is no different to the tribal uprisings of ISIS and Boko Haram. The only difference is the means. They use the voting booth instead of AK47s. As with ISIS, it's more about tribal supremacy than the idea, and it's more about power and control than it is a means to bring about a better society. In the same way that ISIS attracts the disaffected youth and gives them identity, confidence and purpose, Ukip is doing likewise here.

We like to think we are more advanced than the Arabs, but what's happening in Britain today has metaphorical parallels with Syria. The hordes are amassing, taking town after town, throwing out the evil dictator, but once the shelling has stopped and they stand among the rubble, and look at the people they have handed power, they might wish they had listened to the messenger instead of beheading him.
Posted by Pete North at 21:41