Shouldn't it be obvious by now? 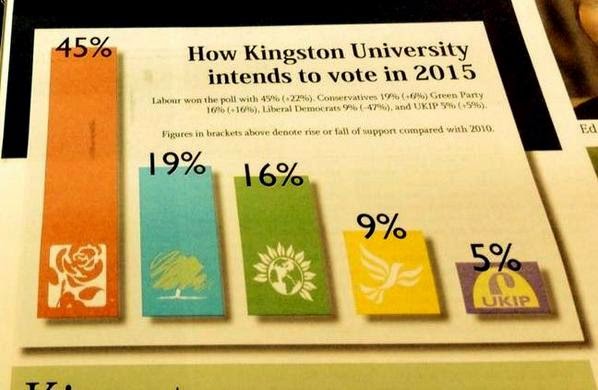 Look at that. 95% of bright young people who get into university don't vote Ukip. The Ukipst reaction on Twitter is that "Years of Cultural Marxism in the classroom is finally paying off". But it's really something more fundamental than that. Young people are attracted to big ideas, positive messages and visions.

The Greens have a positive message. A cleaner, fair world. The Tories have a message of self-reliance and hard work, and Labour have a message of a society without inequality. Course you know it's bollocks and so do I. The long standing messages of these parties don't stand up to scrutiny. But they do have a message.

We know the Lib Dems don't have a message or a vision, and that's why they are in the doldrums same as Ukip. It has been put to me by a Ukipist on Twitter that the Ukip big idea is "re-engaging with the world and taking back control of our country". But that's not the message is it? The message is fearmongering posters about immigration, withdrawing from foreign aid (which is hardly engaging in the world) and leaving the EU.

The EU has a more powerful draw. It is a vision of a united Europe, with free movement, human rights, justice and all the other baubles. Again, you know that's bollocks as well as I do, but saying we don't want to be part of that vision is not a vision in and of itself. Any movement to take us out of the EU has to be one where there is a bigger vision, a promise to the people they can work toward, where leaving the EU is just a mundane procedural event on the way to that. Simply withdrawing from Europe is a negative premise.

The Tories had a big idea. Big Society. Now that is an idea that fell flat because the message was incoherent. But it's not a bad one is it? The notion of volutnarism, with people organising for themselves, doing better at organising group childcare and free schools and doing it better than some dismal local authority following a central diktat. Neighbour looking out for neighbour and a more community based culture where the state is not the one stop shop provider for all our social needs. That's a brilliant idea I can get behind, but the problem was that the people selling the idea did not originate it and they didn't understand it, so could not define it. The message was lost.

Here was an opportunity to turn local authority austerity into an transformational event where people took a more active roles in their own destinies as individuals and communities. A party properly briefed with message discipline would have swept to power with a landslide. But they screwed it up.

But Ukip is even worse because not only do they not have a direction, vision or message, they have no message discipline, and no idea what they want - apart from the same few negative gripes they've been banging on about for years.

What's needed is an idea to energise politics, and Ukip isn't it. We know this because in the main, the vast majority of voters stay at home. Ukip is merely fighting over the diminishing group of people still deluded enough to vote. How utterly unambitious can you get?
Posted by Pete North at 22:37