EU Referendum: Setting ourselves up to fail 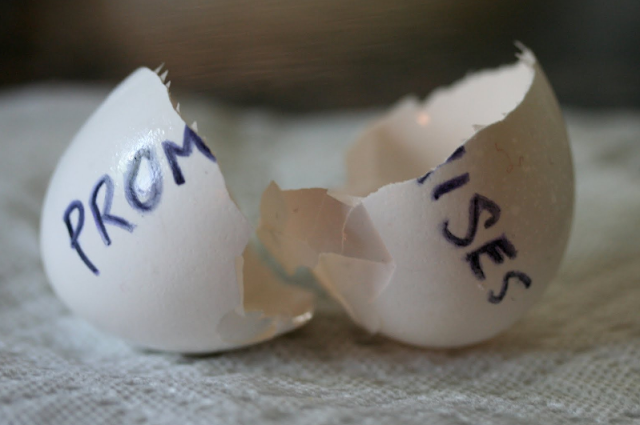 The more I delve into issues surrounding international trade and regulation trying to keep pace with Richard North, the more I discover how little difference Brexit will make as far as industry will notice. But we have a problem. Ukippers are filling up the airwaves with promises of milk and honey - and that a libertarian regulation-free utopia is just around the corner. If we win this referendum, they're in for a mighty shock.

That's why Ukip is becoming a bit of a problem. We're not going to re-industrialise, we're not going to "take back control of our borders" and we're probably not going to get much in the way of trade deals that we don't already have. Things have gotten a bit more complex since the twenty year old eurosceptic arguments were developed.

On the face of it, if you take our word for it that all of the above if true, you might ask why bother leaving, and why all the fuss? Kippers would have it that the ultimate destination of the EU means Britain becoming a minor state of a Federal Europe, eating frogs legs and spending Euros. But that doesn't look like a reality either, nor does the threat of an EU army.

We're never going to join the Euro and even if the EU does achieve the final killer treaty, whatever government we end up with in Brussels couldn't be much worse than our own. Half of the global initiatives that filter down through the EU very much have British officials in the driving seat. The "EU madness" is very much of our own making. As much as our energy policy has impositions from Brussels upon it, it's our own parliament that triple gold-plated it to become one of the most absurd pieces of law ever passed.

At this point,you could be forgiven for ceasing to care altogether since the measurable economic advantages to Brexit are negligible. Very few of the old eurosceptic arguments stand up and even in a federal superstate, Lizzie won't be kicked out of BuckPal anytime soon.

The reason we at eureferendum.com know all this is because we have put all the traditional eurosceptic arguments through some very serious stress testing, and we keep treading in the cold cat sick of reality.

International trade means international regulation which means huge compromises, often taking on laws we don't want for greater good. The broader national interest means compromise. For sure we would have a few more vetoes, but we can't really rely on our government to use them much. We have a veto on UNECE matters pertaining to the environment and I struggle to find an instance where we have used it.

Even falling back on the old tropes about identity and culture doesn't really hold much sway since we as far as identity goes, the Scottish are busy building their own with Wales not too far behind. We have many problems, many of which are of our own making, wrongly blamed on the EU and more probably the result of the centralisation and corporatisation of local authorities.

So what is the actual point? For me, it's about scrutiny and accountability. The EU negotiating on our behalf in any circumstance is intolerable but what troubles me more is that Strasbourg is the mechanism of scrutiny. MEPs are a subspecies of politician who are even less fit to govern than most MPs. As if that weren't bad enough, in the European parliament, even if all our MEPs voted together, we are still a minority by default which means, to use a reductio ad absurdum argument, that if the EU decided we were all suddenly going to drive on the right, in practice we couldn't stop them.

We might also ask if we'd even know what hit us if that did happen. Even our own government is often surprised by measures it has previously agreed to. TTIP went through without our national parliament ever getting to scrutinise it. Something like that is far too important to outsource. 1/28th of a voice is not enough.

As much as anything it's a cultural thing. The problem with us is that we're just not cut out to take an interest in EU politics. Our politics is culturally based in London. We're quite parochial like that, which means important EU matters are ignored when really they shouldn't be. It is treated as foreign news and reported as such. Neither the people nor the media really grasp that the EU is a government in its own right, and it's that ignorance and passivity on which the EU depends to progress it's federalist agenda. There is a democratic deficit that cannot be fixed.

For sure we could have an elected commission and an elected EU president, and that would make for a fine democratic façade (and would essentially establish the EU as a nation in its own right), but that would not make a it a democracy any more than the proverbial wolves voting on the dinner menu. And that's the ultimate principle to fight (and die) for.

Because the EU has always been a top down imposition on the peoples of Europe, with neither a demos nor a mandate, the European Parliament will always be viewed as a foreign talking shop, and our lack of engagement in it ensures we will always get a bad deal. We will treat euro-elections as an opinion poll on the incumbent government thus will always end up with the madcap fringes like the Greens and Ukip representing our interests. Cranks and cronies who are simply not up to the job.

If there are to be new rafts of regulation that could fundamentally change our country, I want Westminster and our fierce internet headbangers chucking it around for debate. TTIP has barely been discussed in any great detail, people are pretty ignorant of what it is, and those who oppose it seem to oppose it for all the wrong reasons. That's because it's abstract to the British political machine.

The EU model could hardly be described as representetive either. We have a mere six MEPs to represent somewhere like South West England. That works out at 1.2 MEPs per million people, to represent seven cities and several large towns. This is not democracy by any definition I understand.

For all we might grumble that democracy in the UK is no real democracy, there is a certain force that guides Westminster in ways that Strasbourg is immune. We need to make it work better, but it's better than what the EU calls democracy. Strasbourg is not steered by public debate and popular discourse.

That is why we must repatriate the scrutiny process. Whatever veto we then end up using will at least be a people's veto. It matters because minutia matters. My example de jour being the shipping container. There are better designs but we settle for the mediocre one because universality is what makes the global shipping trade work as efficiently as it does. Perhaps one of the greatest innovations of the modern world.

The shipping container dictates the size of lorries, the types of dock crane, and the shape and size of ships, the width and camber of roads and the height of bridges. That does mean lorries are now much bigger than we would necessarily want for our roads on this little and ancient island, but the common good benefits are there for all to see. But then cyclists get squished so now we are remodelling our cities. Just one small design standard can change everything. Next time that happens, I want our parliament in Westminster looking at it.

There is also another dimension to this. Many lament the triviality and emptiness of British politics. Our parliament seems ever more preoccupied with interfering in our daily lives. What it really is, is displacement activity. Maybe if parliament was looking at the larger matters of trade it would find less reason to poke its nose into things that do not concern it, and leave the more trivial matters to local councils.

By restoring parliament to matters of importance, we restore its prestige and dignity and thus in the process restore its gravitas. That would perhaps go some way to fixing the crisis of confidence we have in our politics - with each level of government doing what it should. We may then start to see councils responding to to the wishes of citizens having reacquired the powers to act.

That is the battleground on which we must fight. We fight to make Westminster mean something again, to restore the primacy of our domestic politics. Brexit doesn't mean a renaissance of empire and fortune, but a renaissance of politics and participation. That in itself is worth having.

Making false promises of what Brexit will achieve is an open goal for the No camp. If the Yes camp puts eurosceptic arguments under half the stress we have put them under, then they will crumble the moment the debate heats up. Brexit cannot deliver a utopia, it cannot deliver total sovereignty nor can it give us complete control of our borders. A global, internet connected, modern Britain can never close itself off. But Brexit can reconnect the people with their politics and politicians, and it gives us the power to say no when it really matters.

A managerial federal Europe may indeed deliver a base level of prosperity, but we are more than economic units to be managed. We are people and we must have a say in our politics otherwise we are merely spectators of our government rather than participants. Managerial federalism may work while the going is good, but all good things inevitably come to an end. What then? If the people do not say no in this referendum, they may already have said no for the very last time.
Posted by Pete North at 21:31