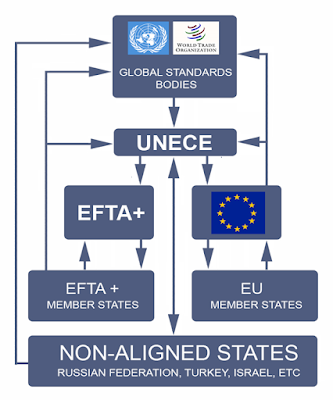 The repeated europhile meme shall be that Norway has no influence outside the EU. This is a lie. The dishonesty of this received argument preys on the ignorance of the public in where EU law comes from.

The vast majority of EU law is not EU in origin. The EU institutions themselves employ fewer than the BBC collectively thus cold not possibly author the masses of regulation churned out all the time. They come from international bodies such as WP.29, WTO, UNECE, Codex, NAFO and a dozen other bodies you have probably never heard of - on which the EU effectively takes out seat and negotiates on our behalf.

While Ukip and others say we don't have a seat at the WTO and other such institutions, we do. However, trade is an exclusive competence of the EU so we're forced to adopt the common EU position derived from its advanced observer status. What this means is we have no independent power of veto.

Norway on the other hand is a member of Efta but still has its own independent vote because Efta is not a supranational organisation. Thus Norway gets a veto on single market rules and regulation before they even get down to the EU level. Such regulations do not get as far as the European Parliament without a global agreement. So when it comes to things like automotive industry regulations, Norway has more say than we do, and it doesn't even have a car industry. Many of the employment regulations, so called "workers rights" come from bodies as diverse as the ILO and WHO. Norway has a strong influence there too.


Without our veto at the top tables, we only get to influence the minutia at the EU level, horsetrading as to how and when we implement that which has already been decided. That much cannot be changed once it has got as far as the EU commission let alone the parliament. Even if all our MEPs voted together, which they rarely do, we couldn't prevent a law we did not want. Norway can.

We will still end up abiding by Single Market rules when we leave the EU, as will the US because the standards are global, but at least we will finally get a say in how they are made and which ones we adopt.

Europhiles essentially parrot the classic europhile propaganda, that conflates the EU with the single market. The EU is not the single market. It is made up of many concentric circles with no single authority. Many believe the EU makes the rules. It doesn't.

But even at the EU level Norway is on several committees and co-operative bodies and does steer regulations, with a few exceptions which are nether here nor there considering the improved influence they have at the top table.

The likes of British Influence actually know all this full well, but it's their dirty little secret that they keep from you because they know that well meaning people will continue to repeat their mantras verbatim. Public ignorance is their most potent weapon.
Posted by Pete North at 20:17