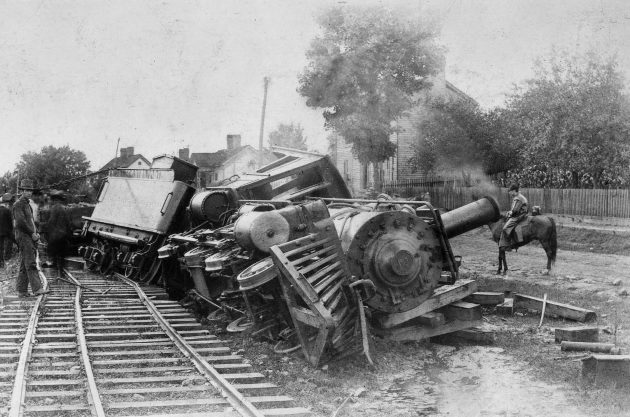 Ukip was described back in May 2014 as a juggernaut that was going to change the face of British politics forever. Men with PhDs said so. It wasn't a juggernaut. It was a steam engine. One that diverted into every siding to hook up another carriage full of unwinnable causes. It was never going to win the argument on climate change, gay marriage, multiculturalism, equality laws or even immigration. But as the campaign went on Ukip became a longer train of hopeless causes with only failure as a destination.

So convinced were they that their media profile alone would win the arguments, without so much as a manifesto or an immigration policy, the train just got longer and heavier, to the point where even a second engine could not push it up a slight incline.

There are those who threw caution to the wind to back Ukip, to take all the issues on head first all at once. "Kicking back at the establishment" they called it. They called doubters "quislings", "traitors" and "fifth columnists". They retreated to their comfort zone in the comments of Breitbart where they would not be challenged. They created a closed community for themselves. There they festered, comforting each other that they were in the right and they were the majority. From there they turned polls in the high teens into single digits. It's all over bar the voting.

Having failed to win arguments and build alliances and make friends, instead making enemies and and hurling abuse, they mobilised a large force of people against them who called them bigots. Ukip then proceeded to prove them all right. They entered every debate without a policy and made it all up as they went along. They bullied and slandered critics and well-wishers alike, and every time they spoke on issues they were supposed to own they got it wrong. They paraded their ignorance each and every time.

They followed their leader without question, they justified his every brain fart. They sang his tune and praised his wisdom. They failed every single test, they projected thieves and fools into office and looked every gift horse squarely in the mouth.

Farage now stands looking tired and defeated. Defeated not by the media, defeated not by the anti-Ukip brigade, defeated not even by his idiotic clan of mouth-breathers. He stands defeated by his own lack of judgement, his own arrogance, his own incompetence and total inadequacy. He is a man of poor judgement and poor character. That is what made this defeat possible, and those who know him well could not have seen this ending any other way for him. His legacy is now a party that can never grow and never recover, and a referendum that has never looked less winnable. That train of hopeless causes is now derailed, with every major issue it's pulling discredited and diminished.

I hesitate to blame the Labour danger on Ukip. It should be noted the Conservative Party had a large part in that by making itself unelectable back in 2005. But that was the gift that should have been the making of Ukip. An astute leader with intelligence and integrity could have done to English politics what the SNP has done to the politics of Scotland. That man was not Nigel Farage - and the snivelling, paranoid and risible ogres who follow Ukip are really a reflection of him. I cannot think of a campaign in all my life time that deserved to fail as much as Ukips.

As to those readers and and supposed friends who came to this blog to slander and abuse me, you may also take a bow. This failure is yours too. Enjoy it, wallow in it, blame me, blame the media, blame everyone but yourselves. Your sad little cult is as much a reflection of you as it is Farage, and because of that "Ukip state of mind", failure is all you'll ever know. I hope it was worth it.
Posted by Pete North at 18:36