Their battle is not ours 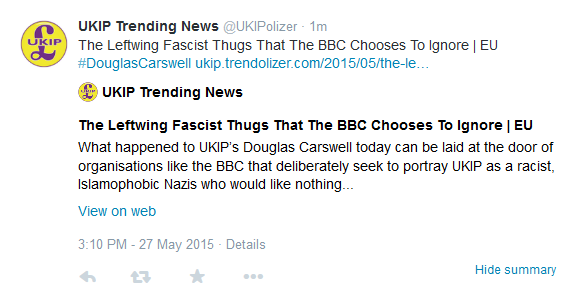 Kippers don't seem to realise the election is over. Hereabove we see Ukip fighting the last election. And this is why Ukip will be the main obstacle to winning an EU referendum.

By ranting on about "Leftwing Fascist Thugs" they are positioning themselves into the void vacated by the BNP. It's exactly the same rhetoric. By attacking the the far left as their number one enemy they de-facto become their equal and opposite on the UK spectrum. It's the politics of the far fringes. We have seen how this pans out before with the BNP. Electoral extinction.

That doesn't trouble me especially, there's nothing I would like to see more, except there's that EU referendum thing on the horizon. That thing Kippers said would never happen under Cameron. Instead of focusing on the task at hand, they're still in a world of their own.

Ukip is fighting a culture war against what they see as an ultra-liberal PC leftwing establishment. As was the BNP. It escapes them that it's a turn off to most, it's not going to win any elections and it will probably lose a referendum.

They are well within their rights to wage such a war, but it shows their culture war takes ultimate precedence over winning a referendum. It shows they have given no thought as to how we might win. This is a critical time for all eurosceptics and this would be the time for Ukip to shine. But it won't because it has no discipline, no intellectual capital and zero ability to plan. That is a reflection of their leader.

It should be the case that this close to an EU referendum, Ukip should be owning every debate, winning every argument, and have a presentable leader who gets it right. Instead it finds itself undermining carefully a worked referendum strategy, at war with itself and with its allies, and with a leader whom just about everyone is agreed is a liability to the campaign.

For Ukip, now might be a good time to put that culture war on ice because it's the moderate middle 10% we need to win over to leave the EU, and grunting about the far left is not going to win any hearts and minds. It's bad enough that Ukip have handed us a poisoned chalice of a referendum, but if this is the shape of things to come from Ukip then we can expect to lose it two-to-one and bury the EU issue forever.

Ukip playing the victim is loser politics. Nobody likes a loser. Losers never win. That's why the out campaign does not need them. They are toxic.
Posted by Pete North at 16:01