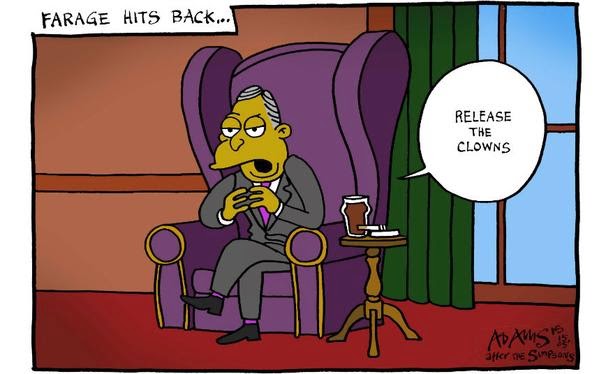 I was going to write an analysis on the Ukip civil war. But if you read this and this and this from this here blog you can see that the clues have been there all along.


Some hardened Ukipists expect a number of MPs in double digits, while those in the media are being more cautious by saying between five and seven. Meanwhile, I'm detecting higher frequency low outliers in the polls that suggest Ukip might be tanking. I will be hugely surprised if Reckless keeps his seat. The only way he will scrape it is to remain absolutely silent between now and the election. Carswell will keep his seat, Farage will fail to take a seat and it will only be by accident of numbers that Ukip sees a breakthrough anywhere else.

If Ukip is competent, which it isn't, it may manage to batter the door down in one of their strongholds as the Greens did with Brighton - and that will be hailed as the new dawn of Ukip, but it will fail to capitalise on that and learn from the success, as indeed the Greens never really learned the lesson from Brighton.

After which we will see inter-Ukip bickering, with competing egos pushing Farage out the door. It is at this point Carswell will make his pitch. Some of the more astute individuals in the media have noted Carswell has been somewhat mealy mouthed in his support for Ukip's health policy and is cagey in endorsing the whole body of Ukip as it stands. One imagines he loathes the Ukipist ilk almost as much as I do. Assuming he hasn't gone native he will be planning on a great purge of Farage's gophers and reigniting the libertarian flame within the party.

The problem with that is he won't be able to sack all of them. He will have to concede on certain core beliefs because to impose his ideas will lead to an exodus of what some are calling red-Ukip. And in the other corner he will face Lunchtime O'Flynn who also thinks he has a natural entitlement to the crown.

What we will probably see is a very public, very bloody spat, possibly resulting in a split, with a new red-Ukip and Nu-Ukip. One will wither on the vine, the other will limp along. The crown will go to the faction first in the office to nick the party database and its backups. It won't be pretty. And while Ukip is fixated entirely on itself the public and the media will lose interest. The media will get bored and move onto the next plaything and Ukip will join the BNP in electoral zombieland.

That is one possible scenario. The other scenario is they will hang onto Farage as a caretaker leader, while drawing down his involvement, while the charisma-free Carswell (or some other placeholder) will help the party limp along while it quietly dies.

In any case, Carswell looks like a bloody fool having bought the hype that Ukip was going anywhere. He mistook it for a real party with real potential rather than a demented and disorganised cult. He thought he would be able to bring some direction and professionalism to the party, blissfully unaware that better men than him have tried and failed. That's because Farage will actively resist it. As we have remarked on this blog, if you look at Ukip as though it were a political party, expecting it to do things that political parties do, you will misread its behaviour and leap to erroneous conclusions.

If on the other hand you view it as a playground gang, with Farage as lead bully, you will see that any attempt to build a team of professional, intelligent people pushing an intelligent agenda is not only a threat to Farage but also to the small army of drongos in all the top positions. It would take a great deal of skill and diplomacy to get rid of them and it won't happen quickly, and that's assuming you could now get good people who would touch Ukip with a bargepole after being so widely discredited.

As to who does actually win... who honestly cares? The party's over. They have wasted our time and squandered their chances.
Posted by Pete North at 10:51