The losers are losing 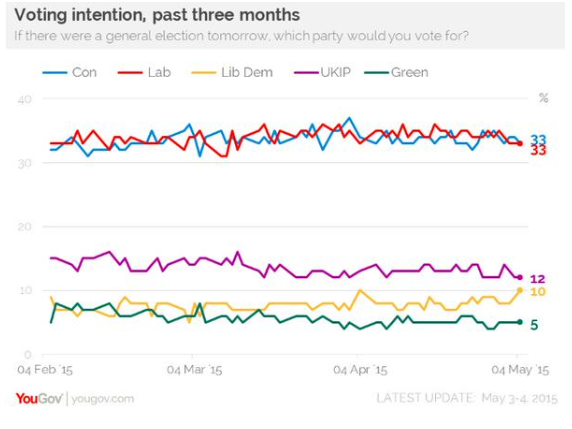 I was one of the first to say the Lib Dems should not be written off. You don't have to like their policies but their candidates are at least credible people running strong local campaigns, even though they studiously avoid any issues of substance to avoid taking a principled stance.

It has been assumed throughout that Ukip would beat them into third place. It's now smelling like that assumption will be busted too. This close to the election it's impossible to say for sure in that the closer we get to polling day the less accurate the polls are in detecting sentiment. There is always a three day lag as news takes time to filter into the public consciousness.

I have always said Ukip would do worse than even the least optimistic estimation. It couldn't be any other way. They've run such an odious campaign and to say it's been incompetent is the understatement of the decade. The words unbelievably crass don't get near it either.

You'll have noticed the frequency of posts on this blog tailed off. As far as this election goes there was little more to be said about Ukip. It all went as predicted and there's only so many ways of saying I told you so, and since advice is neither heeded nor welcome it's all wasted breath. Ukip is dead and it looks like it's going to take our chances of leaving the EU down with it.

From this angle it looks like we're staying in the EU. The people who'll be most active on social media in in a referendum campaign will be those same people who threw their weight behind Ukip. Aggressive, stupid and nasty people making fatuous arguments that have no basis in fact while spitting bile at anyone trying to do them a favour. It's as clear to me now as Ukip's fate was when I started this blog.

The only thing for it is to lose the referendum by the smallest margin possible in order to keep the cause alive. After which British politics is only going to get more fragmented, polarised and fractious. It will be global events that eventually rip the EU apart. History will then record that Britain had an opportunity to leave. It will also record that Nigel Farage was the man who squandered it. Ukip made euroscepticism the property of losers and haters - and for that, they're about to get what they have deserved all along.
Posted by Pete North at 03:21