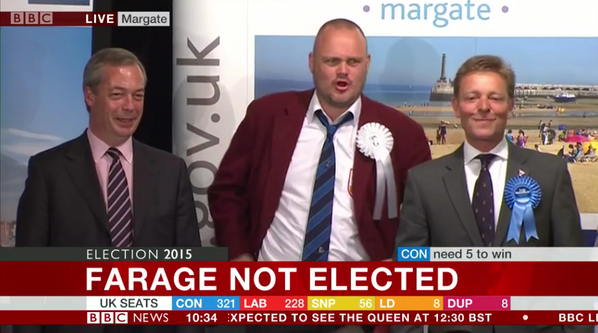 Well, the results are in. Britain has taken out the trash. It's a Tory majority. As far as the Ukip earthquake goes, not so much as a cup fell off the shelf. Reckless lost his seat, Aker didn't win Thurrock and Farage failed to get elected. As predicted.

I said all that would happen. I said it would turn into a two horse race and I said the Lib Dems would keep a handful of seats. I wasn't expecting them to get as hammered as they did, but who honestly gives a toss?

I did say that Ukip would poll less than ten per cent. I don't honestly know if they did or didn't, because again, who gives a toss? That Ukip earthquake didn't happen. Farage fucked it up from day one. It could be no other way. And so what if Ukip has increased it's polling? Look at what Ukip now is. A discredited party of people you wouldn't want to share a taxi with. Now lead by thick as pigshit Suzanne Evans, it won't take her very long to fuck it up even more.

The only win for Ukip, as predicted, was Dougie Crasswell with a substantially slashed majority, ending his political career the next time we have a general election. He's now out on his own, grinding his axe about his timid and failed ideas about MP recall. Pathetic. Ukip should be grateful that the slovenly little worm, Tim Aker, didn't win because THAT representing Ukip would be an even bigger embarrassment than Ukip already is.

Sadly, Ukip won't go quietly. They will continue to limp along as the new English National Party, soaking up the nations losers. Nobody will care what they say. They'll just keep blethering, making it harder for the adults to win an EU referendum - and they still won't bother to find out what they're talking about before they speak.

You may be surprised to learn that I very nearly voted for the local Ukip candidate because Ben Walker is a Royal Navy man who served on Type 42 destroyers, and he was of some use during my campaign against South Gloucestershire Council corruption. But it would have been a violation of my conscience to lend support to that nasty little cult lead by a liar, a snake and thief, so I reluctantly voted Tory - for a man I don't even like, who has never voted against the government. I didn't enjoy doing it but it came down to a question of getting that referendum.

Cameron is the same worm he's always been and he may yet renege on his election promise, as the kippers insist, but I'm ok with it either way. If Cameron wants to commit suicide then I'm as fine with that as having a referendum. Every Tory's life will be made hell. I will see to it.

As to the snivelling kippers who came to this blog to fling their tainted bile at me, including those who called themselves my friends, well, fuck you. You stupid bastards got exactly what you deserve. Don't darken my door again. All that remains is watching your torrent of pisspoor excuses from "media bias" to the first past the post system. You knew full well these were factors before you even started the campaign, so puhlease, quitchabitchin, losers.

In the final analysis, give or take, I called it right from the start. Ukip played to the script I set out in early 2014. The experts and pundits, particularly the cretinous Matthew Goodwin, got it completely wrong. The polls got it wrong, kippers got it wrong and so did most of my readers. They have proven themselves as irrelevant as Ukip.

But none of that matters. Today we have avoided a Labour government lead by a communist propped up by Scottish fascists, we'll probably have a referendum on the EU, and a lot of bad MPs are gone. There will be more cuts to welfare, there will be more council cuts (though not nearly enough) and the left are going to to hyperventilate about it for years. All in all I'd call that a very good day. Farage being outed as the scumbag loser he is, well that's just icing on the cake.

As to this blog, I'm going to have to professionalise on a new blog to win the complex arguments on the EU, so you'll be seeing a lot less of me on this blog, and I'll see you Ukip losers elsewhere. Please note that unless you came here to apologise for your conduct, don't bother to comment, I'll not read them - I'll just delete them. You knuckle-dragging losers have nothing worth hearing and never did. Meanwhile, I'm off to bed. The EU referendum campaign starts today... and I have work to do.
Posted by Pete North at 05:48