The Guardian has sussed it. Farage has to go. 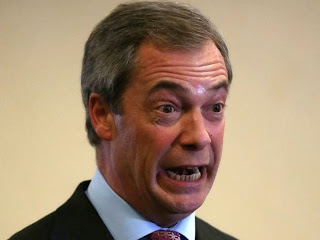 This in today's Guardian...

It seems Farage does well galvanising the convinced, but repels everyone else. This is what worries outers, especially those in the Conservative party. With David Cameron now lionised by his party as an election-winning hero, he probably won’t have to extract too much from EU negotiations to win support for an “in” vote from all but the most diehard Tory Eurosceptics. So long as Cameron can point to a couple of token victories over Brussels, the likes of Michael Gove and Philip Hammond – who once threatened to vote for out – are likely to campaign to stay in. That would leave a dearth of big beasts on the “out” side – with Farage as the most visible face. And that could sink the anti-EU cause.

That is why Farage must go. He is a disaster.
Posted by Pete North at 12:06