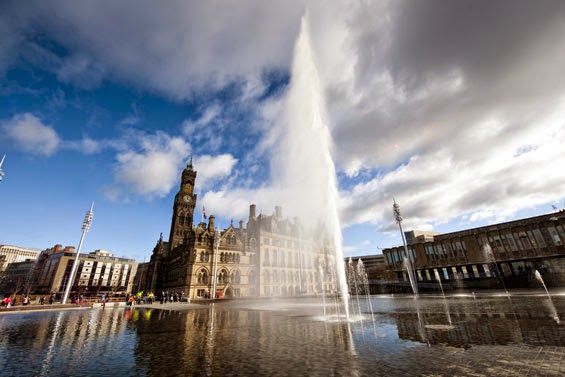 So there's been a shoot-down of a passenger airliner, Libya is going down the pan and (yawn) the Middle East is up in arms about something or other, as it so very often is. But since everyone else is rinsing that for all it's worth, I have to engage in more mundane matters. In this instance, Bradford Council.

This week saw the resignation of £178k a year Council Chief Exeutive, Tony Reeves. Following this, there is to be a review as to whether the council needs an executive at all. Conservative leader Councillor Glen Miller said: "We do not believe there's a need for a chief executive when we have an overall-controlled council and policy is made by politicians."

Yes. He really said that. However, as Bradford Councillor, Simon Cooke, notes:


"80-90% of the spending and activity undertaken by your council (or councils if you live in the shires) is simply given - determined by regulation, set out in statute or otherwise required by central government. And three-quarters of what your council spends comes in the form of central government grant - with all the strings and restrictions that come with this."

"Ministers and bureacrats down in London will always want to make sure that, wherever possible, the agenda of the national government is met by the local council. As a result we have had restrictions of borrowing, limits to tax-raising powers such as rate capping, the use of regulation or ring-fencing to direct spending and, if all else fails, simply removing any power for councillors to control or change what the council does. We even got an instruction this year to hold a 'named vote' on setting the council tax!"

One might argue that a council needs a chief executive more than it needs placeholder councillors, who are totally redundant to local government. Councils are consultative bodies rather than an executive - and largely ignored.

Liberal Democrat leader, Councillor Jeanette Sunderland, apparently "reacted with alarm" at the thought of the chief executive not being replaced. She said: "This is an organisation with a multi-billion-pound turnover. At a time when we need strong leadership, with high rates of unemployment and some real challenges to face, it would be foolish to think that politicians could run the district."

She kinda has a point. While there are a few good eggs like Councillor Simon Cooke, a great many councillors lack the ability for joined up writing, let alone managing a budget of any kind. The position does seem to attract drongos. But there is a good reason for this. The position has little prestige because it holds little power. For that reason, it's not attractive to ambitious political types, and anyone who's serious about politics drifts toward London. Since councillors have no actual power, who would bother? The smart ones go where the money is.

Bradford council district encompasses places like Keighley and Ilkley, Shipley and Bingley. These are towns in their own right with growing populations. Yet here we have an authority district with a populations larger than a hundred countries in the UN. This isn't right. It's not local and it's not democratic.

Our councils have been merged into regional corporate entities and town clerks have become overpaid executives. It's true you would have trouble finding a competent one willing to work for less than an eye-watering salary if they could get that money in the private sector, but that's a big if.

Up and down the country we have chief executives who have never spent a day out of local authority employment, and will spend their whole careers rotating through various posts to secure the next pension and pay bump. We have a burgeoning CEOcracy milking us dry. If they all vanished overnight I expect we would be hard pressed to notice the loss of their special talents.

Personally, I will be glad to see the back of every one of these parasites, but even if we get rid of all of them we won't see the difference in our wallets, or an improvement in services - not until we have broken up these mega-authorities and taken back the power from Whitehall. That's why we need The Harrogate Agenda.
Posted by Pete North at 07:42