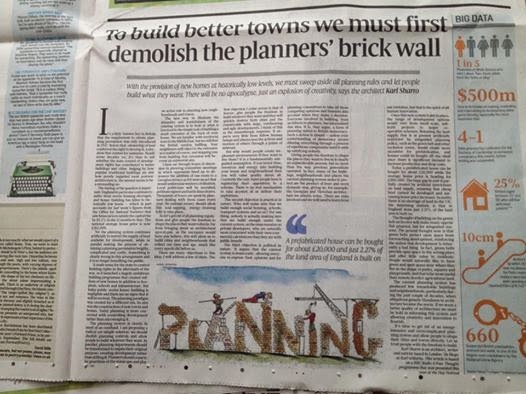 One of the things that irks me so very much is the simpleton mantra that we should drive a horse and cart through planning laws and simply "build more houses" in the South East. There seems to be a meeting of minds among Marxists and libertarians alike in that we can rip up the rule book and let the chips fall where they may. Somehow, some as yet unspecified way, we can wave a magic wand, build more houses and there are no absolutely no consequences to this, and suddenly everyone has nice big affordable homes near to London that don't necessitate expensive infrastructure. Have these people listened to themselves?

First off, it overlooks the fact that with every new house comes two more cars and London's roads cannot cope as they are. The health fascists and fantasists think we can solve this by nudging us all to use bicycles. Well I don't know about you but I don't think I would be fit for a days work having cycled 20 miles in the rain and up several hills, and more to the point, I don't want to. I want to sit in my nice, comfy, warm saloon car, rocking out to music and stuffing my face with a warm pasty and lukewarm latte from the service station. That's just how I roll. That's because I'm a selfish bastard. But that's ok because everyone else is too. I'm not getting on a bicycle this side of hell freezing over.

Some would have it that we shouldn't build new railways and instead focus on driverless cars. There is a school of thought that says congestion would be massively improved if all cars drove themselves as the computers manage the space between each other, but here's another news flash. I don't want my car driving for me. Driving it is the main reason I want one. So we could widen the M25 for sure, but that eventually chokes up at the tunnels and bridges, so we are then looking at new tunnels and new bridges and new junctions. And that doesn't come for free.

Further to this, London will then need several more reservoirs, more sewers, more runways, more power generation, more waste disposal and public sanitation facilities, new railway platforms, more multi-story car parks, and a whole host of other facilities I haven't even considered, and some I don't even know about. That is not to say that we can't do this, but this is not going to happen cheaply and consequently is not going to happen fast. It has to be planned so it can be managed intelligently.

While we certainly can build on floodplains, developments in themselves can cause flooding and so new developments require hydrology surveys and yes, they do need environmental impact assessments. While I'm not taken in by man made global warming theory, air pollution is a very real concern, and while it is a great deal better than it was in the past, that did not happen by accident.

In a modern, first world city, everything needs planning and everything needs a degree of regulation, from the width of a tree, to the height of bus, to the camber of roads and the diameter of manholes. These things seem obscure but they facilitate better travel, cheaper maintenance and more sanitary conditions.

Our building regulations are the reason that entire blocks of flats do not fall over on their faces as happens in China, and our environmental regulations are the reason factories are not pumping out toxic cocktails into agricultural irrigation channels - as happens in China too. Moreover, the "beds in sheds" phenomenon is precisely what happens when you don't have planning regulations properly enforced. We have hazardous, unsanitary developments, built in a hurry and often used to house illegal immigrants at inflated prices.

Cramming people into rationed space certainly does have an impact on quality of life, and the lack of green and open spaces is detrimental to well being. Many argue that it is London's planning restrictions that necessarily cause the crowded conditions, and I don't disagree, but even if we build in the greenbelt, that is still going to require expensive infrastructure, and that does not take any pressure off central London. There will always be a strong demand to be near the centre. If capacity is added, it will soon be swallowed up and then we are back where we started.

So the question is whether we can indefinitely expand and develop the South East. If you let your imagination run wild then there's no doubt that we can perform some great miracles as energy generation becomes smaller and more effective. We can do a great deal to reduce the need to travel with broadband and encourage more home working. We can even build nuclear desalination and power plants that give us plentiful energy and clean water. We can make it so that few of us ever have to travel to work.

But this isn't going to make cars or railways obsolete. We are curious creatures and social animals who like to get out and about, explore, go places and meet people. We do not want to be cooped up at home all week prodding at touchscreens to earn our wages. Nor can nurses and doctors treat patients by remote control. We proved conclusively in the socialist era that high rise living in identikit apartments is no way for humans to live, and America's unbroken urban sprawl ain't no picnic either. Like it or not, we do need effective, fast, clean railways and we do need our roads.

Further to this, there's the conservation aspect to consider. Yes, these NIMBYs are horrid aren't they? They rather object to their councils building cheaply constructed social housing in areas they saved all their lives to live in. What is the point of paying over half a million quid for a house in the Surrey suburbs if your neighborhood is then going to be choked with ten-year-old Vauxhall Vectras and the local wildlife is exterminated? These communities also have rights. But it's not about snobbery. The quintessential English home counties village is something worth preserving from a heritage and tourism perspective - as well as the fact they are important wildlife belts. Green spaces matter.

I also don't want to see housing developments in our countryside either. These precious landscapes are national treasures and we don't want them plastered with Costa's coffee shops, as has happened to Cheddar Gorge (which now has a small retail park). Some things have to be sacred lest we destroy the natural assets that make living on this godforsaken rainy island halfway tolerable.

So what to do about growing pressures on London? The answer is... absolutely nothing. The choke is its own deterrent and scarcity drives up prices which are again a deterrent. I absolutely dispute the notion that any new developments in London are going to be "affordable". What people mean when they say affordable is "subsidised". Where exactly is the sense in subsidizing people to live in a place when that measure creates infrastructure costs that cannot be met by taxing the people moving there?

It's that simple. If people really want to live in that mess, and evidently rather a lot of people do, then they must make compromises. Living affordably in London is not a human right. London is what it is. It's a very special and exciting place with huge attractions, and people who want to live there do so by working hard and making sacrifices. It is a competition, a rat race, it's not for the weak of spirit, and if you want to go there, well, it's not going to be cheap. You accept that fact as precursor. If London businesses need labour they will have to pay London wages. If they don't want to pay London wages, let them leave London.

Meanwhile, unbeknown to our political class, there is rumored to be life North of Watford where houses are bigger, cheaper, nicer, with all the space you could possibly want for development without further expansion. All this can be unlocked by opening up the domestic air travel market and giving the regions tax autonomy which makes it attractive for business - thus slowing the growth of London to a pace where development can keep pace with the natural growth it will inevitably experience, whether we build more homes or not.
Posted by Pete North at 23:39