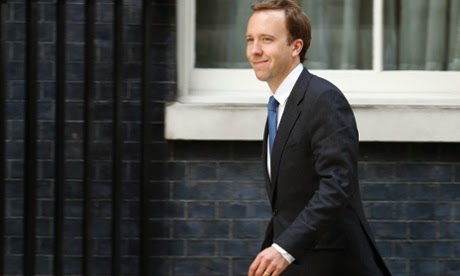 Following my earlier piece explaining why this reshuffle does not matter, we get this from The Guardian:


The new set of Conservative environment and energy ministers announced on Tuesday bring a track record of opposing renewable energy, having fought against wind and solar farms, enthusiastically backed fracking and argued that green subsidies damage the economy.

New energy minister, Matthew Hancock, signed a letter to David Cameron in 2012 demanding that subsidies for onshore wind farms were slashed.“I support renewable energy but we need to do it in a way that gives the most value for money and that does not destroy our natural environment,” he said at the time.

Hancock, who takes over from Michael Fallon, also opposed new turbines in his Suffolk constituency, arguing: “The visual and other impact of the proposed turbines is completely unacceptable in this attractive rural corner of Suffolk.”

So insomuch as this is tokenism, it is also window dressing. What these people think is less important than what they do, and more importantly; what they are allowed to do. For sure, my views are now "represented" - but not acted upon. Thus we have false representation, otherwise described in the legal profession as... fraud.

But hey, Liz Truss doesn't have a penis, so that means women are represented, right?
Posted by Pete North at 08:11